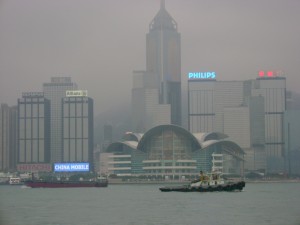 Hong Kong on a foggy day.

Thousands of passengers to Asia, where governments have implemented the most draconian measures to prevent the spread of swine flu, have been facing that prospect every day for two weeks. Unfortunately, in most cases, they were not given all the information they needed in advance so they could plan accordingly.

Beginning April 28, dozens of planes arriving daily in Japan from North America have been held after landing until a team of health inspectors — wearing yellow protective gear, masks, goggles and gloves — takes everyone’s temperature with scanners and reviews filled-out questionnaires.

Those measures followed the Japanese government’s decision that all airline passengers suspected of being infected with the new virus, along with at least three dozen fellow travelers and cabin crew who were near the suspect, would be quarantined for 10 days in airport hotels. Even if you are perfectly fine, that policy could still affect you — and you could spend the duration of your trip in quarantine instead of speaking at a conference or dancing at a wedding.

For days, passengers had no idea of the new procedures until they landed in Japan. At Tokyo’s Narita International Airport, they were kept on board planes for up to two extra hours, which led to missed connections. In the first couple of days, the flu questionnaires were not distributed until arrival, which added to the delays. Later on the forms were given to the airlines and passed out to customers by flight attendants.

Kevin Baughn, a frequent traveler from Seattle, barely made his connecting flight from Tokyo to Singapore on United Airlines. He and a friend flew a few days after the new policies were adopted, so it took them only 40 minutes to deplane, and “fortunately, there was no line at all at security, so we breezed through,” he said.

At Delta Airlines, spokeswoman Susan Elliott said that Tokyo operations are normal and the health inspections are now taking about half an hour.

That’s the case if no one on board is suspected of having swine flu. Several passengers, however, did become suspects, and during the weekend four of them tested positive for the virus. After they were taken to hospitals, another 48 fellow passengers and crew on their Northwest Airlines flight from Detroit to Tokyo were quarantined in an airport hotel.

Earlier in the week, 46 travelers were quarantined because one person on their American Airlines flight showed some symptoms but later tested negative, Japan’s Kyodo news agency reported.

Trying to protect your country from an unknown deadly virus, especially with memories of the 2003 Severe Acute Respiratory Syndrome (SARS) still alive in Asia, is certainly understandable. Still, the Japanese authorities apparently were in such a hurry to implement the new measures that they were slow to communicate them to airlines and travelers.

Other Asian countries reacted to the situation differently. China focused on Mexicans, rounding up for testing people who hadn’t been to their country in months.

South Korea decided to measure passengers’ temperatures with ear thermometers, but instead of boarding aircraft, health inspectors processed fliers one by one as they deplaned, said Andy Holderness, another Seattle traveler who was in Seoul last week.

“I’m sure everyone was worried about some unrelated low-grade fever and what would happen. Even though I felt fine, I was still relieved when they let me through,” he said.

Hong Kong, where remote scanners in the terminal measure people’s temperatures as they walk by, actually registered one confirmed case of H1N1 — a 25-year-old Mexican man who had flown in from Mexico via Shanghai. The hotel where he stayed for only a few hours was quarantined for a week.

“The 36 passengers sitting in the vicinity of the patient on the same flight and two taxi drivers who took the patient have all been traced and they are now being quarantined,” the government said last week.

After accusations of harsh and unnecessary measures, authorities profusely apologized to hundreds of hotel guests for keeping them locked up and offered them free accommodation, meals, Internet access and newspapers as well as free changes to their plane tickets since many missed their return flights.

Hong Kong Chief Executive Donald Tsang defended “a need for strict action when we discovered the first case” in order “to contain a virus which we don’t know much about.”