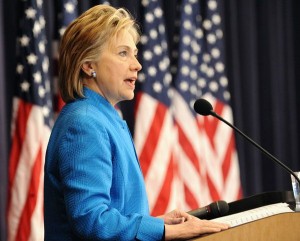 The State Department released a statement by Mrs. Clinton, who worked from home after a bad fall late Wednesday in which she fractured an elbow. She is expected to have surgery within days, spokesman P.J. Crowley said.

Thursday’s order marks a significant change in policy, and officials said it goes into effect immediately. The State Department will now cover the moving expenses of domestic partners of gay Foreign Service members on their way to a new assignment, as well as the cost of any emergency evacuation.

“Domestic partners of federal employees have for too long been treated unequally,” Mrs. Clinton said. “This change is the right thing to do, and it is the smart thing to do.”

Mrs. Clinton’s order came a day after President Obama extended to gay federal employees limited benefits, such as paid leave to care for a sick partner but not health coverage. Her directive had been approved in advance by the White House.

Partners of gay and unmarried heterosexual diplomats will now be given language and other training at the Foreign Service Institute in Arlington. In addition, they will have priority when applying for employment at U.S. embassies and consulates abroad, which is now afforded only to spouses.

“Changing our policy to provide training, medical care and other benefits to same-sex domestic partners will promote the cohesiveness, safety and effectiveness of our posts abroad,” Mrs. Clinton said. “It will help the department attract and retain personnel in a competitive environment where domestic partner benefits and allowances are increasingly the norm for world-class employers.”

Just before leaving office in late 2000, former Secretary of State Madeleine K. Albright designated domestic partners “members of household,” but that did not bring meaningful benefits. Still, it allowed though it did not require ambassadors and other mission managers to extend some limited benefits, such as building passes and access to medical clinics.

Mrs. Clinton’s order makes those requirements mandatory. That would prevent cases like the recent one of a department employee in Mexico whose two sons tested positive for swine flu. The employee was given the anti-viral medication Tamiflu by the diplomatic post’s health unit, but the employee’s partner was denied the medication until acting Ambassador Leslie Bassett intervened.

“We will implement this policy by changing our Foreign Affairs Manual and the Standardized Regulations to allow the same-sex domestic partners of the department’s Foreign Service employees to qualify as family members for a variety of benefits and allowances,” Mrs. Clinton said. “Where appropriate, this extension of benefits and allowances will apply to the children of same-sex domestic partners as well.”

Jason L. Davis, acting ambassador to Malta and a gay career diplomat, called Mrs. Clinton’s order “a huge, positive change.” He said that, “with the exception of health insurance, we are now being treated the same as straight families in all the areas that matter most.”

Many of the benefits, such as diplomatic passports and certain embassy jobs, are only available to U.S. citizens. State Department officials also conceded that in some countries, partners of gay diplomats may not be accepted and granted visas by the host government. In many countries around the world, homosexuality is illegal.

“The department also will work with foreign governments to provide same-sex domestic partners, to the extent possible, with diplomatic visas, privileges and immunities, and authorization to work in the local economy,” Mrs. Clinton said.