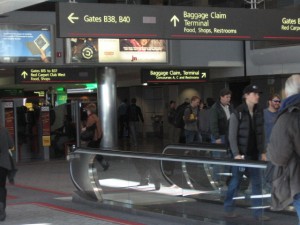 Do you always pay for your airline tickets? If not, what would you do if you are denied boarding unless you show the credit card used for the purchase at check-in?

It may sound unreasonable, since many companies buy tickets for their employees with corporate cards that all of their travelers cannot possibly carry with them. It happens often enough, however, for all of us to keep our eyes open for any alerts with such requirements during the booking process.

Last month, I used the Singapore Airlines Web site to book a ticket to Indonesia for a co-worker. I was asked if I was the passenger, and when I proceeded to enter my credit card number, this message appeared on the screen:

“Please note that, since you are not part of the traveling party, you will be required to sign a Letter of Indemnity (LOI) and submit it to the nearest Singapore Airlines ticket office. Please bring your credit/debit card used for this booking for verification purpose.” It also said that, if I fail to comply with the requirement, the passenger “will be denied boarding.”

The airline doesn’t have an office in Washington, and the nearest one is in New York, which I had no plans to visit soon. At the time, however, I thought I’d be flying through Singapore before my co-worker’s trip and present my card and letter to an airport agent there, so I issued the ticket.

My plans later changed, and my only option was to fax the paperwork to the New York office. It worked in my case, but it’s up to each office whether a fax will be honored.

While Singapore has a blanket policy, that is not the case with most other airlines — their requirements are on a case-by-case basis, usually generated automatically by their computer systems. All carriers with such a practice cite security reasons for it, such as credit card theft.

Abdul Samad, a frequent traveler from New York, recently bought a ticket on United Airlines for a friend. When the friend tried to check in at the Atlanta airport, she was “asked to produce the card that was used” for the purchase “or buy a new ticket at current price, which was at least three times the original amount,” Mr. Samad said.

His friend missed her flight, although later an agent at the counter “took pity on her” and let her on the last flight for the day. “I, the credit card holder, was traveling in Asia at that time and was not contactable,” Mr. Samad said. “I was really surprised to hear [about it] when I came back.”

The most likely reason for his experience is not that the name on the card didn’t match the one on the ticket, but that he used a discount certificate when issuing the ticket online. That has happened to me as well, even when I’m the passenger. This message appears as part of the receipt in red letters: “The credit card used for this purchase must be available at check-in.”

If you purchase a ticket from an agent on the phone, they should see the same message and are obliged to read it to you and make sure you hear and understand it.

Unlike Singapore Airlines, the United system doesn’t let you know about the requirement until the ticket is issued. That makes the practice difficult to predict, although using an electronic discount certificate seems almost a certain bet. Otherwise, I’ve bought tickets for several friends and co-workers without triggering the red-letter warning, but sometimes I can’t avoid it when issuing tickets for my parents, who have the same last name.

All you need to do in such cases is show your card to any airport agent at any time before the trip at issue, and they are supposed to remove the alert from the reservation. Don’t leave the counter before they have done it. I ran into two agents at Washington Dulles International Airport last week who didn’t know how to do it and had to call their support desk.

It’s also worth noting that, in the Frequently Asked Questions section of United’s Web site, it says: “If you complete a reservation for another traveler, you may be required to present your card at airport check-in. Refer to your confirmation page for information or instructions.” The real question is: How many people read such information on any airline Web site?

Neither United’s nor Singapore’s policy is the norm in the industry. Spokesmen for American Airlines, Continental Airlines and Southwest Airlines said their carriers have no such practices. Passengers on Germany’s Lufthansa have had problems, but there appear to be no specific rules.

“We have no official policy that dictates a passenger needs to present the credit card at check-in. In some instances, if something seems suspicious, then it is possible that a passenger may be asked to produce the card,” said Lufthansa spokesman Martin Riecken.