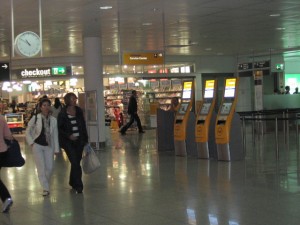 We all think we know that for a flight to depart and arrive on time, dozens of people have to do their jobs perfectly. It seems, however, that the only time we truly appreciate that is when something goes wrong and we feel the consequences long after landing.

In an attempt to encourage more people to travel — particularly overseas — I’ve been trying to dissuade them from believing the common perception that travel is a hassle. With online check-in and the ease of achieving elite airline status, thanks to unprecedented promotions this year, you can avoid long lines at the airport and almost breeze onto the plane.

That’s how I feel most of the time. United Airlines pioneered priority boarding through a separate red-carpet line for its premium passengers a few years ago, and all its agents strictly observe the policy. Couple that with a priority security line at most major domestic airports and the ability to print a boarding pass at home, getting on a plane has never been easier.

Taking off on time is, of course, another matter. Bad weather and mechanical problems tend to cause most delays, but there are times when neither occurs and passengers wonder why they are still at the gate an hour after their scheduled departure time.

Germany’s Lufthansa is known among frequent travelers as one of the world’s most reliable airlines. I’ve flown more than 120 flights on it and have been satisfied most of the time. But it took an incident that showed an employee’s poor judgment earlier this month to make me think about all those other employees who had done their jobs well when nothing went wrong.

As Lufthansa customers know well, many flights out of its main hubs in Frankfurt and Munich don’t depart from the terminal, and passengers are taken to the plane by bus. My hour-long intra-European flight from Munich was on a small commuter plane operated by a regional carrier called Air Dolomiti, which is wholly owned by Lufthansa.

With most of us on the bus, one of the gate agents announced that there had been a “planning mistake” and a five-member crew — not ours — showed up to fly the plane back to Munich and needed seats on our flight. Because the flight was “booked to capacity,” the agent asked for five volunteers to get off and take the next flight, offering 250 euros ($366) as compensation.

When we boarded the aircraft and everyone was seated, I noticed that more than five seats remained vacant. Technically, they were in business class, but on such a small plane, the seats are identical, and the only difference is that the snack served in coach is smaller. I asked a flight attendant why those seats couldn’t be used either by the second crew or to upgrade elite fliers — both standard practices across the airline industry in an overbooking situation — and she said that Lufthansa didn’t want to pay Air Dolomiti for business class.

I couldn’t believe my ears. Lufthansa’s business class cabin on all its short-haul planes, including one-aisle jets such as Airbus 320 and Boeing 737, can be as big as the airline wants it. Because the seats are the same, there is a curtain that can be moved up and down the cabin, depending on how many tickets have been sold in each class.

Even if it had been a real business class, five people with confirmed seats had to wait nearly four hours until the next flight because Lufthansa didn’t want to pay its own subsidiary? None of this made sense to me, so I asked Martin Riecken, Lufthansa’s head of corporate communications for the Americas, to check into the case.

“I did some research, and it proved that what happened was simply a mistake,” he said last week. “There is no policy in place not to upgrade passengers on Air Dolomiti, and it actually wouldn’t make any sense.”

As usually happens during a trip, the gate agent’s mistake reverberated for hours. The luggage of the five left-behind passengers was already on board and had to be offloaded, which extended the delay to 45 minutes. I had to catch a ferry upon arrival, but it only runs once an hour, so I missed the one I was aiming for.

Actually, I was even unluckier. My carry-on bag was too big for the small aircraft, so it was taken plane-side by a ramp worker who put a tag on it saying “delivery at aircraft” — a standard practice for commuter planes. However, because of the reshuffle in the cargo compartment while offloading the five passengers’ luggage, when we landed, the workers couldn’t find my bag where it had been left and asked me to get it at baggage claim.

Unfortunately, that didn’t happen until half an hour later, so I missed another ferry.