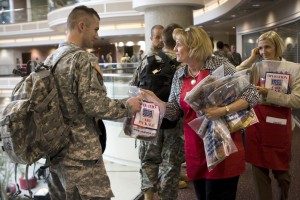 If you are in the military, you have probably visited the special lounges at the airports close to your base on your way to or from deployment. But did you know that you can use dozens of such lounges across the country while on a personal trip with your family?

Those so-called airport centers are operated by the United Services Organization (USO), a private, nonprofit group whose mission is “to support the troops by providing morale, welfare and recreation-type services to our men and women in uniform.”

I’ve written about airline business lounges before, and like most frequent fliers, I can hardly imagine travel without the oasis they provide in crowded terminals. I had no idea, however, that there were military lounges until I heard about them from Army Reserve Capt. Malia Du Mont. She was the one who first told me about the discounted hotels around Europe where service members from any NATO country can stay, which I wrote about in July.

Like the airline lounges, USO’s airport centers provide peace and quiet, along with drinks, snacks, newspapers and Internet access. But those are just the basics. Some centers have sleeping rooms, shower and laundry facilities, said USO spokeswoman Tiane Harrison.

“If you sleep, you don’t have to worry about missing your flight, because someone will wake you up,” she said in reference to a service provided by the staff upon request. “Even if you do miss your flight, we’ll help you make other arrangements.”

Although there are paid staff members at the centers, most staff are volunteers, Ms. Harrison said. They usually escort their guests to the gate, “but before that happens, they announce that troops are deploying and ask passersby to help give them a hero’s farewell,” she added.

The USO Web site has a list of all 36 domestic airport centers, the services they offer, their locations and contact information. States with many military bases, such as California, Florida and Texas, have the highest number of lounges. To gain access to them, you have to be an active-duty service member.

There are several lounges overseas — most of them at air bases, but some at commercial airports, such as those in Frankfurt and Seoul.

The lounges are only part of USO’s network of facilities in more than 20 states and 10 countries. The group is also well-known for organizing entertainment tours for troops with comedians, musicians and other artists.

“The USO currently operates more than 135 centers worldwide, including 10 mobile canteens located in the continental United States and overseas,” according to the organization’s Web site. “Service members and their families visit USO centers more than 6.9 million times each year.”

Capt. Du Mont, who has served in Afghanistan, said she was “stuck” at the Bagram Air Base outside the capital Kabul “on more than one occasion for two or three days awaiting onward transportation, and had nowhere to go except the USO, where I could telephone home for free, have access to the nicest bathrooms on the base, watch movies and relax.”

The USO center at Bagram is named after former Army Ranger and Arizona Cardinal Pat Tillman, and his framed jersey hangs on the wall, she said. Cpl. Tillman was killed by friendly fire in Afghanistan in 2004.

“Military people travel a lot and spend a lot of time waiting, particularly when connecting from a military flight to a commercial flight or vice versa. Often, we travel with a lot of luggage too,” Capt. Du Mont said.

“USO lounges are a haven for service members,” she said. “They vary widely — some of them have big-screen TVs and Internet, while others resemble more typical waiting areas. What they have in common is that they are all staffed by enthusiastic, friendly volunteers and offer a quiet place to relax between flights both for active-duty service members and their families.”

“During my 28 years of service, I’ve had the good fortune to use USO [airport centers] during stops between flights for short rests, sleep breaks, and, of course, their entertainment and snack options,” he said. “I’ve also used the USO on several occasions while awaiting loading during airborne training missions.”

Capt. Du Mont said the nicest USO lounge she has visited “was in Minneapolis, where there were leather couches, a made-to-order sandwich bar, and even a sleeping room with bunk beds.” Alas, that particular lounge no longer exists.