HomeParadise so close, yet so far 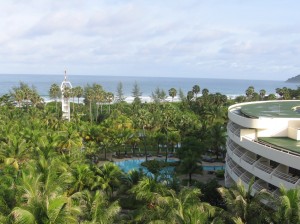 The Hilton resort in Phuket, Thailand.

“Tough life” is a sarcastic exclamation I often hear before traveling overseas, and to some extent I understand it.

As often happens, at the beginning of the summer several friends asked me about my upcoming trips with Secretary of State Hillary Rodham Clinton. Two of our planned destinations were the Greek island of Corfu and the Thai resort town of Phuket. No wonder people think I lead a charmed life.

Although I have no reason to complain, the reality is very different. It’s certainly better to have caught even a quick glimpse of one of those places than not, but it’s frustrating to be stuck in a conference room or a press filing center all day, knowing that one of the world’s most famous beaches is just footsteps away.

So how does one make the best of it? After all, you may never be able to visit certain countries or cities if not for that business trip. That’s what I thought about Corfu. As lovely as that island may be, it’s not exactly at the top of my list. As it turned out, I never made it to Corfu because Mrs. Clinton broke her elbow a week before the planned departure in June and canceled the trip.

Despite a complicated surgery and a predicted long recovery, the secretary was determined to travel to Asia last month, so there we were in Phuket, in a filing center with a gorgeous view of the beach and no time for sunbathing or swimming.

Resort towns like Phuket are not the best places for large international conferences, but the Thai government most likely decided that Bangkok was out of the question for the annual meeting of foreign ministers from the Association of Southeast Asian Nations (ASEAN).

In fact, a smaller ASEAN meeting earlier this year was cut short because of new protests, again embarrassing the Thai government, which was barely able to provide safe passage for the high-profile participants to the airport.

The choice of Phuket seemed logical — it’s much easier to keep protesters away from an island, and it has enough hotels to accommodate the several dozen delegations and hundreds of reporters.

What it doesn’t have, however, is a sufficiently large conference venue and the necessary supporting infrastructure. The hotel where the meeting took place wasn’t big enough for Mrs. Clinton and her delegation to stay there. There wasn’t a room available even for press conferences, so reporters had to spend hours at a time in a tent outdoors with a couple of fans to battle the scorching heat.

“It’s a high honor to go on these trips,” said Fox News correspondent James Rosen. “But there is an aspect to it — the routine of airports, vans, buses, hotels, then rinse and repeat — that makes one feel a little like Sylvester the Cat perched outside Tweety Bird’s cage. You see a city up close but can’t really sink your teeth into it. I tell friends I’ve been to fifty or sixty countries that I’m dying to go back to.”

Outside the bubble, things weren’t much better. The invasion of foreign dignitaries resulted in hundreds of additional vehicles on Phuket’s narrow roads, causing traffic jams. I felt bad for the tourists who had ventured out of their resorts and tried to explore the island. What they saw wasn’t exactly “paradise on Earth.”

Besides reporters following the president or the secretary of state, high-flying business executives know what it’s like to have life pass you by.

“I feel that business trips are consumed with schedules and commitments, which alters the mind-set,” said Steve Boress, a consultant for Allstate Insurance Co. “As a traveler, you know there are places to explore and enjoy — yet your responsibilities keep those activities far from reality. A true shame, as one may never have the opportunity to visit the same place again.”

Markus Nottelmann, vice president at the Rockwood Service Corp., a materials engineering company, said he tries to “build in a few extra hours at the end of the schedule” to see some of a city’s highlights. When that’s not possible, and if a city has two airports, he sometimes flies into one and out of the other, forcing himself to drive through some of the city. The places where that makes sense aren’t many, but Tokyo is a good example, if you don’t mind an expensive cab ride.