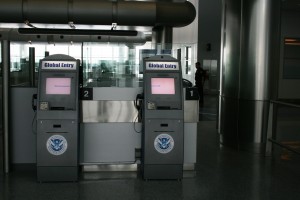 I’m not in the business of promoting products and services — let alone government initiatives — but the Department of Homeland Security’s new Global Entry program has truly changed my life. There is no reason why it can’t change yours, provided you are a U.S. citizen or permanent resident.

All you need to do is go to the program’s Web site, fill out a relatively detailed online application form and pay a $100 fee. If Customs and Border Protection (CBP), which is part of the Department of Homeland Security, determines that you are a low-risk traveler, you’ll be invited to an interview at the airport of your choice. A CBP officer will take your digital photo and fingerprints, and your Global Entry membership will be activated and electronically linked to your passport or permanent resident card, also known as a green card.

No separate document will be issued. The only visible sign that you belong to the program will be a small sticker on the back of your passport or green card. If you change your document, you must visit a CBP office so the new number can be entered in the system. That document is how the kiosk you’ll be using at the airport will recognize you.

Upon arrival from abroad, ignore the regular line of waiting passengers and look for the kiosks — the signs are usually big enough not to miss. Even if you don’t remember the test run during your interview, the kiosk will be patient and give you more time if necessary by pressing a button on the touch screen. It will take your picture and fingerprints and match them against the ones stored in the system. Then you will put in your flight number and fill out an electronic customs declaration.

If all goes all right, the kiosk will print out a receipt, which you must hand to a customs officer as you exit the baggage claim area — not an immigration officer, since the kiosk plays that role. Global Entry is different from previous Trusted Traveler programs, which make it easier to go through airport security but have nothing to do with immigration.

Currently, 20 major international airports in the United States participate in Global Entry. As of last week, more than 24,000 people had enrolled in the program, and the kiosks had been used more than 83,000 times, according to CBP figures. The airports with the highest number of users are Washington Dulles, Chicago O’Hare, Houston and Atlanta, said John Wagner, director of the CBP’s Trusted Traveler Programs.

“Global Entry is still in pilot status, and we need to publish federal regulations to make it a permanent program,” Mr. Wagner said. When that happens in the next few months, the change “will be invisible to you and won’t impact your membership.”

If you are worried that too many people could sign up and create lines at the kiosks, Mr. Wagner said that is very unlikely, because CBP can always add kiosks.

“We watch the numbers every day and have kiosks in reserve. It’s pretty easy for us to put them in. It makes no sense to have long lines,” he explained. “There are no caps [to membership], and ideally we’d like to get as many frequent travelers as we can. We’ve projected that between 300,000 and 400,000 people will enroll.”

Mr. Wagner attributed the big difference between the current enrollment numbers and the projections to two main factors: Lack of awareness about the program and reluctance to be subjected to background checks.

As with any pilot program, there are still some glitches, which are being “fine-tuned,” he said. You will know something went wrong when a big cross appears on your printed receipt. That means you need to see an immigration officer before heading to customs. In that case, you’d also need a paper customs declaration, so it’s a good idea to have one filled out in advance — just don’t date it unless you must.

Even if you get a cross on your receipt, you don’t have to wait in line — during my CBP interview, I was told to wave to the officer in the nearest booth, who is supposed to process me right away. Thankfully, I haven’t had to follow that advice. The only irritant I’ve experienced at Dulles is a long line of people waiting to turn in their customs declarations, as there is no separate line for Global Entry members.

How can you benefit from the new program if you are a foreign citizen or resident? Currently, DHS has a reciprocal arrangement with a similar program in the Netherlands, and agreements with Britain, Germany, Australia and New Zealand are in the works, Mr. Wagner said.

Regardless of such arrangements, you can still benefit indirectly, as the more Americans enroll in Global Entry the more immigration officers will be free to process foreigners, shortening wait times — at least in theory. Hopefully, those officers won’t be laid off instead.