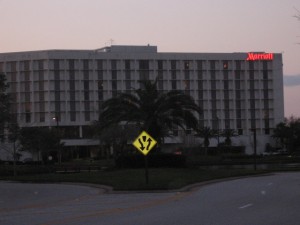 The Marriott hotel at the Orlando International Airport in Florida.

Another domino in the hotel fees game has began falling. Three of the world’s largest chains — Starwood, Marriott and Hyatt — now offer free Internet access to their elite members. Another two, however — InterContinental and Hilton — are holding out. For how long?

Like most frequent travelers, who are usually also elite members of various loyalty programs, I’ve become accustomed to free hotel perks, such as breakfast, room upgrades and lounge access. At the same time, I’ve oddly got used to paying Internet fees that are sometimes higher for one day than my monthly charge at home, and for speed several times lower.

I complain about them occasionally — especially in Europe, where they can reach $30 — but if I’m working on the road, I keep paying them. After all, using a hotel computer in a business center is not the best way to research and file a story.

So I was surprised when I checked in at a Hyatt resort in California to speak at an airline conference last fall and was told that I was exempt from the standard Internet fee. I don’t even have top elite membership in Hyatt’s Gold Passport program — just mid-level. That is not my preferred program, and somehow I had missed the news last spring that both my Platinum status and the higher Diamond now allow free Internet access.

As a Starwood Platinum member — the top level for that chain — I was very pleased by last month’s announcement that I don’t have to pay for Internet any longer at brands such as Sheraton, Westin and St. Regis. The new benefit, however, doesn’t apply to the mid-level Gold status.

Last week, Marriott joined the game, but with a major limitation. While it will extend free Internet access to both Gold and Platinum members beginning in May, the only participating hotels will be those in the continental United States and Canada.

Now all eyes are on InterContinental and Hilton. Can they afford to resist this trend without risking customer loyalty?

“We’ve seen these movements from competitors and are taking a look at whether doing something similar is a good idea, [but] no decision yet,” said Steven Sickel, InterContinental’s senior vice president for distribution and relationship marketing.

When I first asked Hilton last week, the company seemed not to be budging. Jeff Diskin, senior vice president for global customer marketing, reminded me what I already knew — that, as a Diamond member, the top level in the HHonors program, I can choose free Internet as my “on-property VIP benefit.” The same applies to Gold members.

However, that means giving up room upgrades and lounge access, which Starwood, Hyatt and Marriott don’t require me to do.

Mr. Diskin also pointed out that thousands of hotels worldwide already offer free Internet access to all guests, referring to lower-end properties, such as Hampton Inn and Hilton Garden Inn hotels. That, of course, is the case with similar properties across the hospitality industry, including Starwood’s Four Points brand and InterContinental’s Holiday Inn and Staybridge Suites.

In fact, one of the travel-related questions I’m most frequently asked is: Why do expensive hotels change extra for everything beyond the room rate, and cheaper ones give you everything else for free? The only answer that makes sense to me is: Because they can. The thing is, it’s 2010, and Internet access is no longer a luxury — for most travelers, it’s an essential part of their lives.

After I questioned both of Mr. Diskin’s arguments, he seemed to be leaving the door at least slightly open to future changes. “We are in a constant dialogue with our members about how we can continue to make HHonors the best guest-loyalty program in the industry, and we will continue to enhance our benefits over time, based on this feedback,” he said.

Changing the current policy won’t be easy or quick. Hilton owns or manages more than 3,200 properties around the world — compare that to Hyatt’s fewer than 400 — and they would probably like to be consulted before any decisions are made.

Marriott has about the same number of hotels as Hilton, and it thinks that offering free Internet to elites is in the company’s interest. “We feel that the competitive advantage of this benefit for our most frequent guests will make up for any lost revenue, if there is any,” said spokeswoman Laurie Goldstein.

For some travelers, free Internet in hotel rooms is not a deal-breaker, because they have special data cards that use signal from cellular networks.

“These allow me to set up a Wi-Fi network wherever I go,” said Douglas Morris, a computer services expert from West Melbourne, Fla. “This is certainly not as fast and latency-free as a typical hotel connection, but guarantees that I have this option no matter where I stay.”

So Mr. Morris has no intention of abandoning Hilton, even if it doesn’t follow Hyatt, Starwood and Marriott. Still, he was pleasantly surprised when he arrived at the Hilton Financial District in San Francisco on Sunday and was told that the hotel actually offers free Internet to all its guests.

Excited, I immediately called the larger and more popular Hilton in that city, in Union Square, but was told that the additional charge there is still alive and well.