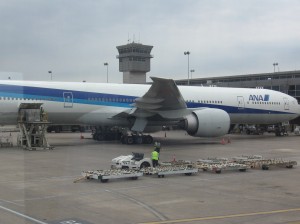 An All Nippon Airways Boeing 777 at Washington Dulles International Airport.

The idea of the Open Skies accords, which Washington has with more than 90 countries, was to liberalize air travel between the signatories, allowing flights from any city in the first country to any city in the second without the previously imposed government restrictions.

However, the deal reached with Japan in December has one glaring exception — U.S. carriers can have only four pairs of takeoff and landing slots at Tokyo’s Haneda Airport, and only between 10 p.m. and 7 a.m. Even though the document hasn’t been signed yet, there are no plans to change the Haneda limits.

“Despite the success of the U.S. government in reaching agreement in principle on a draft Open Skies text, as a practical matter, the skies over Haneda will remain tightly closed,” Delta Airlines said last week in its application to the Department of Transportation for all four slot-pairs.

Delta is one of five U.S. carriers seeking access to Haneda, which offers a bigger competitive advantage than Narita International Airport, because it’s smaller and much closer to central Tokyo. Travel time to Narita is about 1½ hours on average, depending on exact location and traffic, and can be very expensive. Haneda, on the other hand, can be reached in less than half an hour.

So in reality, how open are the “open skies”? Everyone understands that airports have their own limitations — apart from government restrictions — and they can’t accept an infinite number of flights, simply because there are only 24 hours in a day. For example, slots at London’s Heathrow are still very much controlled by the airport, but no government-imposed limits are specified in the Open Skies agreement with the European Union.

The difference with Haneda is that the Japanese government has a lot to do with the rules. Its main argument, according to officials close to the negotiations, is that, since 1978, Haneda has been a domestic airport — and it’s really doing airlines a favor by allowing them to operate international flights from there.

In fact, as I wrote in October, short-haul Asian destinations, such as Seoul and Beijing, have been served from Haneda for several years — mostly because of pressure from the business community, whose members were tired of schlepping the 45 miles to Narita to catch a flight not much longer than their trip to the airport.

More recently, Japan decided to permit flights from Haneda to Europe and Canada and on longer Asian routes. But just as that move erased any doubt that Haneda is an international airport again, the government said it can only be international from late night to early morning — to fill the void left by Narita’s nighttime curfew.

The problem for the Americans was that, by the time they got around to discussing slots, many of them had been given away to Canadian and European carriers, said John R. Byerly, deputy assistant secretary of state for transportation affairs, who oversaw the negotiations. The Japanese decided that only eight slot-pairs will be allowed to the United States, split evenly between U.S. and Japanese carriers.

As extraordinary and restrictive those rule are — they have never been part of Open Skies agreements before — things could have turned out much worse for the U.S. industry.

The American delegation realized that Japan Airlines (JAL) and All Nippon Airways could end up with better slots than their U.S. competitors. For example, the Japanese carriers could depart Haneda as early as 10 p.m. and arrive in the U.S. at a decent hour, while the U.S. airlines couldn’t even land at Haneda until 10 p.m., which meant they could take off no earlier than midnight, pushing U.S. East Coast arrivals to the middle of the night.

The only other option for U.S. carriers would have been to arrive at Haneda in early morning and park their planes there until 10 p.m., but that makes little sense and is very expensive. So the American negotiators insisted that no departures to the U.S. be allowed before midnight for any carrier.

“Our aim was to ensure fair competitive opportunities for airlines on both sides,” Mr. Byerly said.

U.S. flights to Haneda are expected to begin in late October, when the airport’s fourth runway is scheduled to be completed, and the fight for the slots is already heating up. Delta wants to fly from Seattle, Detroit, Los Angeles and Honolulu; United Airlines from San Francisco; American Airlines from New York and L.A.; Continental Airlines from Newark, N.J., and Guam; and Hawaiian Airlines from Honolulu.

With JAL and All Nippon certain to take two slot-pairs each, their respective global alliances, Oneworld and the Star Alliance, are assured access to Haneda. American is a Oneworld member, and United and Continental are part of Star — and they have all applied for antitrust immunity on trans-Pacific routes.

Because Delta’s alliance, SkyTeam, has no member in Japan, it “must have the ability to offer Haneda service from both West coast and Eastern U.S. hub gateways,” the carrier said in its application. We’ll have to wait and see if the Department of Transportation agrees.