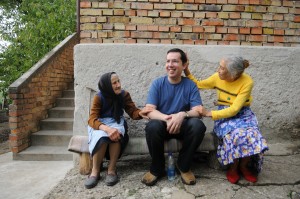 Nicholas Kralev with his grandmother (left) and aunt near Burgas, Bulgaria. (Photo by Astrid Riecken)

Last month, as I sat in the same room in my parents’ apartment where I heard the news, I realized that those events had changed my life more fundamentally than anything else I have experienced before or since. Had communism not collapsed, I would never have been allowed to go to the United States. I would not have a Harvard degree. I would not be working for The Washington Times. And I would most certainly not have covered four U.S. secretaries of state.

Looking back, it seems I quickly accepted the new realities. I was old enough to remember what life under communism was like, but young enough to adapt to the new circumstances more easily than older folks. Until 1989, I had no desire to be a journalist, because there was no free press and not much happened that seemed worth writing news stories about. Instead, I wanted to be a theater director.

In 1989, however, the theater was in the streets — demonstrations and processions in which hundreds of thousands of people expressed themselves freely for the first time in their lives. Not everything was joyful, however: Empty store shelves and snaking lines became a daily occurrence in the first months after communism’s fall.

Hoping to help others understand these momentous events, I became a journalist and published my first news story at 18. A year later, I became a reporter for the Bulgaria National Television evening news in the capital, Sofia, where I had moved to go to college.

Back to high school

Returning last month to Burgas, the city on the Black Sea where I grew up, I went to my high school to find out what, if anything, today’s teenagers know about the Cold War and how they have been affected by its consequences.

The first thing that struck me upon returning was the deplorable condition of the building which had not been renovated since it was built in the 1970s.

In these classrooms, students and teachers learned the new rules of democracy together. Almost overnight, the students had to switch from “comrade” to “sir” or “madam” when addressing teachers — though the teachers didn’t mind if students slipped and used the old word for a while. Teaching the right values was the biggest challenge, since society’s entire values system had been turned upside down.

Six of my former teachers gathered in the principal’s office to talk about the changes. Now, they said, students are mostly interested in money. After all, “children are a reflection of society,” said Yana Nikolova, who teaches German.

The teachers said they also worried that what they are required to teach does not prepare students for real life. “They are very pragmatic, but our education system doesn’t offer pragmatism,” said Marineta Ivanova, a geography teacher.

Five of the teachers invited me into their classes to talk to students. They seemed not much different from their American peers, and many expressed positive views of the United States.

Few said they knew what life under communism was like. Those who did said parents and grandparents had told them that there was no official unemployment and crime was low in those days. But they also knew that average Bulgarians had to wait years to buy a car or a home, that bananas and oranges were sold only on New Year’s — Christmas was not an official holiday — and that people were sent to labor camps for expressing dissident political views.

Nostalgic feelings about communism appear largely confined to the elderly, including my 83-year-old grandmother, Radka Georgieva. “It was better then,” she said when I visited her in her small village, Ravna Gora, about 20 miles outside Burgas. “Salaries were not high, but neither were prices. Now prices are high, but salaries are still low.”

Petar Stoyanov, Bulgarian president from 1997 until 2002, said low living standards “remain the Achilles’ heel of the country’s transition” to democracy. “I never imagined that, 20 years later, there would be so many people, mainly the elderly, who can’t afford to buy simple things,” he said in an interview in his Sofia office.

“A similar sentiment exists in regard to law and order,” Mr. Stoyanov said, referring to the apparent calm of the communist period compared with the widespread perception — both in Bulgaria and in the West — that criminals and corrupt officials are now ubiquitous and rarely punished.

“A weak judicial system and a sense of injustice is one of the biggest open wounds of our society, which undermines confidence in the state,” he said. “Poverty alone is not what drives people to take to the streets — it’s also corruption and injustice.”

Simeon Saxe-Coburg-Gotha, son of the last Bulgarian king and the prime minister from 2001 until 2005, said one of the country’s biggest ills remains “negativism,” which he said he unsuccessfully tried to “shake off” during his term in office.

Many Bulgarians blame their tendency to look for the negative in things — and rising nationalism and chauvinism — on the media. Most newspapers and TV stations seek not to inform, but to promote certain economic and business interests, several journalists said.

“The lack of transparency of the ownership of many media groups is a huge problem,” said Tzvetelina Uzunova, a former colleague at Bulgarian National Television who later became Mr. Saxe-Coburg’s press secretary. Some reporters make up parts of their stories, she said. She added that they told her they were threatened by their superiors with pay cuts unless they “brought in a scandal.”

Velislava Dureva, a freelance journalist who began her career during communism, said it was easier to write around official censorship then than it is to fight more sophisticated censorship today.

Georgi Papakochev, a longtime broadcast journalist, said the recent release of the names of former agents of the communist secret police who currently work in the media further undermined the credibility of journalism. “Those are people who have been influencing public opinion for years, and some of them have spoken publicly against secret agents,” he said.

Bulgarians have a habit of scolding countrymen for complaining too much and then proceding to air their own complaints. That makes it difficult to gauge how happy they are with the changes of the last 20 years.

When pressed to list accomplishments, however, many point to EU and NATO membership. Mr. Stoyanov called them “exceptional achievements” and said there could be “no comparison with 1989.” Other improvements include a rather posh capital. Sofia now rivals any European capital — apart from the thousands of cars parked on sidewalks. The opportunities that foreign travel has provided to Bulgarians, most of whom never left their country during communism, have also had a positive effect.

Still, Bulgaria has fallen behind other East European nations, such as Poland and the Czech Republic, in economic and political terms, and many here say the transition to democracy and a free economy is taking much longer than they expected in 1989.

Mr. Stoyanov attributed the slow pace of reforms mainly to internal factors. “None of us understood the destruction we inherited after 45 years of communism,” he said. “The idea that you could wait for someone else to do the work had taken away individual creativity and initiative.”

Iva Rudnikova, a reporter for the Capital newspaper who recently wrote a series on the events that followed the end of the Cold War, said true change took longer than expected because the pro-democracy leaders who emerged in 1989 made significant compromises with the communists, who renamed themselves socialists.

“They explain that with a desire to ensure a peaceful transition” and avoid the violence that took place in neighboring Romania, she said.

One of the biggest positive changes I noticed is that there are smiling people on the streets.

“This is the new generation,” Ms. Rudnikova said. “They are wonderful — they smile, they are well-traveled, and they care about the environment.”

Many seem to have broken the old habit of waiting for someone else to do the heavy lifting.

Vesselin Galov, the 25-year-old revenue manager of the Sheraton hotel in Sofia, said he started working at the hotel at 19 and kept improving himself by taking various professional classes and learning English and Spanish.

Watching Mr. Galov, who was the top manager on duty the day we met, make on-the-spot decisions about a visiting official Chinese delegation revealed a face of Bulgaria’s youth I had rarely seen before. Judging by his work ethic and worldview, and by my conversations with the students at my old high school, the ghost of communism will not be around Bulgaria much longer.