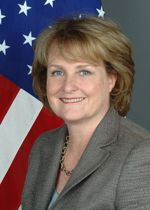 In an ambitious strategy that goes beyond any previous efforts to reach out to other countries, the Obama administration “seeks to become woven into the fabric of the daily lives of people” there, its top public-diplomacy official said Wednesday.

“We must do a better job of listening, learn how people in other countries and cultures listen to us, understand their desires and aspirations, and provide them with information and services of value to them,” said Judith A. McHale, undersecretary of state for public diplomacy and public affairs.

Ms. McHale presented the administration’s strategy, which emerged from an eight-month review of the government’s programs in the field, at a hearing of a Senate Foreign Relations subcommittee. She repeatedly used the word “narrative” to describe how the United States is being depicted overseas.

“In this information-saturated age, we must do a better job of framing our national narrative. We must become more proactive and less reactive,” she said. “Increasingly, our opponents and adversaries are developing sophisticated media strategies to spread disinformation and rumors, which ignite hatred and spur acts of terror and destruction. We must be ever-vigilant and respond rapidly to their attacks against us.”

“These officers will be responsible for ensuring that a public-diplomacy perspective is incorporated as part of senior policy deliberations and for coordinating all our public-diplomacy initiatives throughout their respective regions,” Ms. McHale said. “We are taking steps to ensure that our policies and programs are informed upfront by a clear understanding of attitudes and opinions of foreign publics.”

Including public-diplomacy officials in policy-making was also a priority for Karen P. Hughes, undersecretary of state in the George W. Bush administration. She became a full participant in then-Secretary of State Condoleezza Rice’s senior planning meetings, but a true integration of public diplomacy in the policy process has yet to be achieved.

The importance of such an integration across the government was cited by Mrs. Hughes and two other former undersecretaries, James K. Glassman and Evelyn S. Lieberman, during the same hearing of the Senate Foreign Relations subcommittee on international operations and organizations, human rights, democracy and global women’s issues.

Mr. Glassman, who succeeded Mrs. Hughes at the end of the Bush administration, said that public diplomacy is “in doubt,” because “it is not today being taken seriously as a tool of national security by policymakers.”

Mrs. Lieberman, the first occupant of the undersecretary post when it was created at the end of the Clinton administration, said the State Department’s “public-diplomacy practitioners are not considered equal” to other diplomats.

At the same time, both Mrs. Hughes and Mr. Glassman cautioned against an obsession with “being liked” by foreigners, which Mrs. Hughes called a “fundamental misunderstanding” of the purpose of public diplomacy.

“Today, in the war of ideas, our core task is not how to fix foreigners’ perceptions of the United States, but how to isolate and reduce the threat of violent extremism,” Mr. Glassman said.

Ms. McHale, a former CEO and president of Discovery Communications who took office in May, has kept a low profile compared with Mrs. Hughes’ high visibility, which was mainly a result of her close personal relationship with Mr. Bush.

Edward P. Djerejian, a former career diplomat and founding director of Rice University’s James A. Baker Institute for Public Policy, said there is no doubt that, in the current administration, President Obama is the nation’s “top spokesman.”

“They are using the president in a major way,” said Mr. Djerejian, who headed a congressionally mandated commission on public diplomacy in 2003. “The undersecretary is a coordinator and a substantive manager to ensure the instruments of public diplomacy are used across the government.”