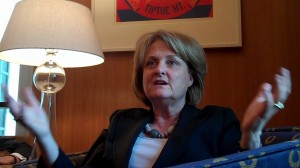 Judith A. McHale, undersecretary of state for public diplomacy and public affairs.

Judith A. McHale, undersecretary of state for public diplomacy, said in an interview with The Washington Times that “a very narrow segment” of the world’s population is at risk of turning to extremism, and the policies adopted by the Bush administration should be broadened.

“Looking back, there was such a focus on countering violent extremism that everything got swept into the same category or the same bucket,” Ms. McHale said. “So if you were teaching English in many countries around the world, it was described as part of our [counter-extremism] effort, whether or not the individuals you were teaching were ever at risk of becoming violent extremists.”

Ms. McHale also said “we can’t take our eye off the ball on violent extremist elements [because] they are very real and dangerous enemies to us.” But “you risk offending people by creating the impression that we think they are going to go that way, when in fact they don’t,” she said.

The Obama administration has come under criticism in recent weeks for deliberately avoiding the words “Islam,” “Islamic” and “jihad” in reference to terrorism in order not to offend foreign audiences. Several government documents conspicuously omitting those terms have surfaced, prompting accusations of White House censorship, though at least one was published at the end of the Bush administration.

Sen. Joe Lieberman, Connecticut independent, called that practice “absolutely Orwellian and counterproductive to the fight that we are fighting.” Unless the U.S. government is “honest” about the nature of its enemy, “we are not going to be able to defeat this enemy,” he told Fox News on Sunday.

The Obama administration also has abandoned the term “global war on terror” and has rarely used “war of ideas.”

Ms. McHale said she has “not been told to stay away from certain words” and their use depends on the particular context.

She said the administration supports counter-terrorism outreach abroad, but those programs are “appropriately targeted” at potential extremists in schools or neighborhoods.

“This is a new approach,” she said. “We want to show that we have a broad range of programs which enable us to have relationships with the billions of people around the world who are absolutely at no risk of becoming violent extremists.”

“Even under Undersecretary [of State for Public Diplomacy] James Glassman, who did indeed focus his too-brief tenure on fighting violent extremism, there was a lot of broader outreach and very open dialogue with Muslim leaders going on,” she said. “Prior to that, [Undersecretary] Karen Hughes took great pains to reach out to Muslim audiences during her famous ‘listening tour.'”

Ronald E. Neumann, president of the American Academy of Diplomacy and a retired career diplomat who was ambassador to Afghanistan during the Bush administration, said Ms. McHale’s assessment was “maybe a little exaggerated on the Bush approach but not completely over the top.”

He suggested that the previous administration might have emphasized countering extremism to secure better funding for public diplomacy programs from Congress, even when those initiatives had little to do with anti-terrorism.

Mrs. Hughes, who was undersecretary from 2005 until 2007, said Ms. McHale’s was not “a valid or accurate observation.”

“Countering violent extremism was obviously very important, but it was one of three key pillars of my public diplomacy strategy,” Mrs. Hughes said. “The others were: offer a positive vision of hope and opportunity that is rooted in our deepest values of freedom, justice, opportunity and the dignity of every person, and foster a sense of common interests and values between Americans and people of diverse countries, cultures and faiths.”

Mr. Glassman, who was Ms. McHale’s immediate predecessor at the State Department, declined to comment. But during a Senate hearing last month, he said that “in the war of ideas, our core task is not how to fix foreigners’ perceptions of the United States, but how to isolate and reduce the threat of violent extremism.”

At that same hearing, Mrs. Hughes and Mr. Glassman cautioned against an obsession with “being liked” by foreigners, which Mrs. Hughes called a “fundamental misunderstanding” of the purpose of public diplomacy.

Ms. McHale said that is not what she is trying to do.

“I’m not on a campaign to make everybody like us,” she said. “I have a high degree of respect for people, but this is not a branding or marketing exercise. It’s about building relationships with people around the world who help us move our national agenda forward.”