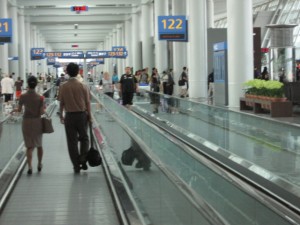 Regular readers of this column can testify that I’m no apologist for the travel sector — I try to point out both good and bad practices, though the criticism may sometimes outweigh the praise. But I get angry when I read or hear in the media that airlines are synonymous with bad customer service.

As I wrote a year ago, the constant face-to-face interaction of thousands of front-line airline and hotel employees with customers around the world every day magnifies even a mundane incident, especially if splashed on Facebook or Twitter. The high visibility has taught carriers and hospitality companies valuable lessons, and many of them have learned from their mistakes.

Unfortunately, that cannot be said of too many other businesses. In last year’s column, I mentioned RCN, the cable company, which had left my building in Washington without phone, TV and Internet service for more than 18 hours and hadn’t bothered to apologize — let alone offer any good-will gesture for its failure.

“It is definitely RCNs policy to apologize to a customer when we learn that there is any disruption in any service,” Lisa Barder, director of communications and public relations, said when I contacted her after the incident.

Deeds, however, speak much louder than corporate spin. On April 26, RCN had a massive outage that reportedly affected not only D.C. but several states. Because most customers have “bundled” services, they lost all of them for about five hours beginning in early afternoon — those included businesses and many people working from home, who could do little with no phone and Internet in the middle of a weekday.

This time, I decided not to contact Ms. Barder but wait and see if RCN “is committed to providing its subscribers with the best customer care and service experience,” as she had assured me a year earlier. A few days after the outage, I found an RCN envelope in my mail box — it looked different from a bill, so I thought it must be that apology I was awaiting. Ironically, it was a marketing letter that began with, “What’s better than saving with bundled services?” As you might have guessed, no apology has arrived to this day. One has to wonder how difficult it is to e-mail the same message to all disserviced customers with one click.

In a separate case, late last year I canceled my New York Times subscription and have been waging a battle with the company’s customer-service department for a $60 refund for nearly six months. After several e-mail messages assuring me that I’d receive my money back within a week or two, I was informed that my request had been denied. When I called to ask why, the agent said she didn’t understand the “code” someone else put in my account and promised that a supervisor would call me the next day. Having heard from no one, I called back a week later and was told a mistake had been made and my request would be submitted again — this time “correctly.”

I’ve been an RCN customer for about nine years, and a New York Times subscriber for 13. If those two companies think they know how to reward loyalty, they need only look at how major airlines and hotel chains do it — and not just the elite benefits they offer, which are still fairly unique to the travel sector, but taking responsibility and apologizing when something goes wrong.

Last summer, I was on a United Airlines flight from Seoul to San Francisco that experienced heavy turbulence, though no one was hurt and no other accidents occurred. I’m a demanding traveler and have certain expectations from a carrier when it causes disruptions or inconveniences, but I was stunned to discover an e-mail message from United as soon as we landed with an apology for the turbulence — something no airline can control.

A few months ago, United canceled another international flight I was booked on because of a mechanical problem, and it not only paid for my hotel that night but also gave me a $600 voucher for a future trip. That’s standard practice, which is actually government-regulated in some countries. Still, United has developed one of the best customer-service systems in the industry, though it could do better at educating passengers about it.

Last month, I awoke at the Crowne Plaza hotel in Guatemala City to a flooded bathroom because of a pipe leak. The duty manager comped my room charge for the night. The Crowne Plaza brand is part of the InterContinental chain.

As I wrote in July, I was denied the usual Hilton elite benefits at the Conrad hotel in Bangkok during a stay with Secretary of State Hillary Rodham Clinton. The general manager took responsibility for the mistake and offered me 30,000 bonus points, which are enough for a free night at a mid-level hotel across the Hilton chain.

None of this means that United, Hilton and InterContinental have figured it all out when it comes to customer service. But at least they are trying. I wish I could say the same about RCN.