HomeTired of ‘remote’ gates in Frankfurt 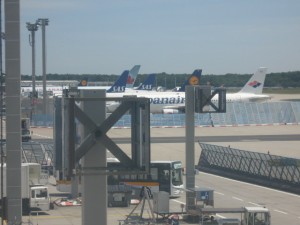 How many busloads of passengers does it take to fill a Boeing 747? Ask the Frankfurt Airport.

With all the innovations and conveniences brought to modern airports, it’s inexplicable to me why airports in some of the most developed countries on the planet remind one of the Third World. Many travelers often complain about London’s Heathrow, but I find Frankfurt no less frustrating.

I realize there are not enough gates with jet bridges, and some airlines prefer “remote” gates because their use is cheaper, but I can’t remember flying through Frankfurt and not being taken to or from a plane by bus at least once. As of this week, I’ve had 111 takeoffs and landings at that airport.

As much as I hate the buses, by now I’m used to the prospect of having to put up with them, especially for flights to certain destinations. Most of the time, such flights are flown on narrow-body aircraft, such as Boeing 737 and Airbus 320, which can be filled with just two busloads.

This week, however, I experienced boarding a United Airlines Boeing 747 by bus. I was sure the flight wouldn’t leave on time, and I was right. I can hardly wait for the expansion of Terminal 1 to be completed.

What’s even harder for me to understand is why there aren’t enough gates with jetways at the much newer Munich Airport. I was also disappointed by the transfer experience there this week. With 52 takeoffs and landings, this was the first time I had to change terminals. I arrived at Terminal 1 — courtesy of another bus — and it took me about 45 minutes to reach Terminal 2. The signage was very poor, and the shuttle bus between the terminals runs only once every 20 minutes.

U.S. airports may have their problems, but when was the last time you were taken to the plane by bus?