HomePreserving upgrades in case of rebooking 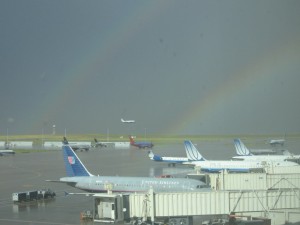 Dealing with flight delays and cancellations is challenging enough for travelers, but for some of us it has an additional complication: How to preserve our upgrades in case of rebooking. My trip to Alaska this week provided a textbook example.

As experienced and creative as I might be in handling flight disruptions, the weather is always my worst enemy. I’ve rarely felt more helpless than I did in Denver on my way to Anchorage. My plane had diverted to Colorado Springs because of a thunderstorm, and my departure time kept being pushed back more times than I cared to count.

I was sitting in United’s Red Carpet Club watching other planes take off and land, but the one I needed was still at another airport. The only reason to smile was the double rainbow that appeared at one point — you can see it in the photo above.

I had no other options. United has only one flight to Anchorage a day from Denver, though it also flies up there from San Francisco and Chicago. Those flights, however, had already left, so connecting was impossible, even if I could make it to those two cities.

At least I didn’t have to worry about missing another flight, rebooking and potentially losing a previously confirmed upgrade, as this was my last segment for the day.

Things were very different, though, on my way back home. The plane coming to Anchorage from Denver was late — another patch of bad weather had diverted in to Wyoming. It was clear I’d miss my connecting flight, so I called United to get rebooked. The flight I wanted was to Washington National (DCA) — there was no upgrade space available, but they were still selling two revenue seats in first class. An alternative was a flight to Dulles Airport (IAD), which had four revenue seats in first class but nothing to upgrade, either.

A supervisor refused to open upgrade space for me despite the second long delay I was experiencing in three days and was only willing to waitlist me for first class on either flight — there were 22 people waitlisted for an upgrade to DCA, and she didn’t think it was fair to jump me over them.

I got really angry — but not because of her refusal. The plane to DCA was a Boeing 757 and had 24 seats in first class, and the one to IAD was a Boeing 767 with 34 seats in first. Until recently, it was very likely that those flights would have had at least a couple of upgrade seats the night before departure.

But in March, United implemented free domestic upgrades for all elites, which they don’t even need to request. So by the time a top elite member needs a seat because of involuntary rebooking, those seats have been given away to customers with much lower status.

When I got to the Anchorage airport, I saw that I was first on the waitlist, and with two seats still open at 4 a.m. Denver time for an 11 a.m. departure, I thought I was pretty safe. But when I landed in Denver, those two seats were gone. I was still at the top of the waitlist, and three people with reservations on the flight hadn’t checked in.

I did get the upgrade at the gate in the end, but this was the closest I’d come to flying in coach in years.