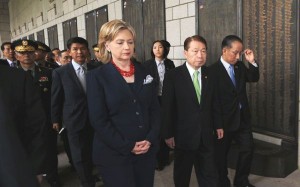 In early 2008, Condoleezza Rice had to go to South Korean President Lee Myung-bak’s inauguration, and initially had no intention of stopping in Tokyo or Beijing. But after diplomatic pressure from both capitals, she caved in. I skipped Tokyo on that trip.

Clinton herself fell victim to protocol in May. She had to co-chair the so-called U.S.-China Strategic and Economic Dialogue with Treasury Secretary Timothy Geithner in Beijing, and to drop by the 2010 Shanghai Expo in Shanghai. For months, her aides said that no other stops were planned, but in the end, she went to Japan and South Korea, too.

It seems that this time Clinton successfully defied protocol. It helped that she met with her Japanese and Chinese counterparts at the annual meeting of foreign ministers from the Association of Southeast Asian Nations (ASEAN) in Vietnam. But I have little doubt that, in spite of those meetings, the Japanese and Chinese still lobbied for her to drop by their capitals.

By the way, this ASEAN meeting was the first I’ve missed in years. I always thought attending a high-level summit in Southeast Asia in late July was a misery because of the very hot and humid weather, but DC is much worse these days.