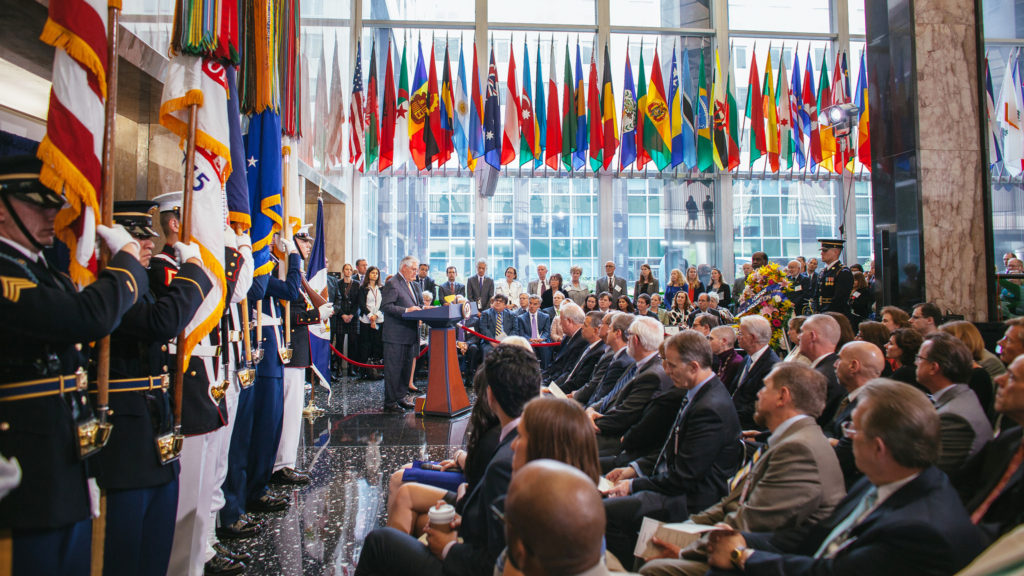 President Trump doesn’t bother to hide his disdain for diplomacy. As he has made clear repeatedly, most recently during his Asia trip, in his book, compromising, seeking common ground and accommodating other countries are negatives that betray weakness. His concept of deal-making apparently has little to do with sustained and principled diplomacy, and he sees little value in institutional memory, long-term strategy and cultivating a complex web of relationships in favor of a transactional foreign policy based on the needs of the moment.

Trump doesn’t seem to think much of our professional diplomats, either. Having initiated an effort to cut drastically their numbers and budget, and driven about half of the most senior career officers from the Foreign Service, he now dismisses them as irrelevant. Asked about the large number of unfilled top positions at the State Department, which historically have been shared by political appointees and career professionals, he told Fox News earlier this month, “I’m the only one that matters.”

So, if the United States is to conduct a transactional foreign policy, led by a president with no relevant experience who relies much more heavily on his gut than on the federal bureaucracy and civil servants, does it need a permanent professional diplomatic service? Can U.S. embassies and consulates be fully staffed by experts who are sent by various government departments, such as the Treasury and the Department of Defense, which already have a presence there, eliminating the core State Department personnel now running our overseas missions?

It won’t come as a surprise that I believe we do need the Foreign Service, though I’m fully aware that this is not obvious to many Americans, who may not even know we have such a service. The key to concluding that the United States needs professional diplomats is understanding that diplomacy is a profession. There is no consensus in our society — or any society, for that matter — that this is, in fact, the case. Professions like law and medicine require formal degrees and passing exams. Others can be practiced after certain training. In contrast, in addition to the career diplomats who do pass exams in order to join the Foreign Service, the State Department has hundreds of political appointees occupying diplomatic positions at any given time, who have never practiced or been trained in diplomacy.

By virtue of rewarding unqualified cronies and others who helped them get elected with such important posts, including a third of all ambassadorships, both Republican and Democratic presidents have signaled for decades that they don’t believe diplomacy is a proper profession. At the same time, the military has remained off limits for political appointments.

It’s unrealistic to think that this practice will disappear anytime soon — in fact, new blood and outsiders’ points of view are healthy for any bureaucracy, if only they could have some qualifications. But it’s a fantasy to believe that U.S. foreign policy — transactional or not — can be carried out by ad-hoc groups of Americans with various areas of expertise, whether they are economists, lawyers or communications experts. There is no substitute for the training and experience of professional diplomats, as well as their foreign language skills. Navigating other countries’ governments and societies, and being intimately familiar with the major players in them, are essential to getting things done abroad. Showing up only when a deal needs to be hammered out, without consistent and deliberate engagement and cultivating relationships, is a losing proposition in the long run.

The Foreign Service exists because so mandates a law, the Foreign Service Act of 1980. It was created in 1924 by another law, the Rogers Act. So the president can’t just do away with it. But he can reduce its ranks and diminish its significance — or decimate it, of which Trump has been accused by the American Foreign Service Association. The administration’s critics worry that its actions will dramatically weaken U.S. influence around the world and prevent our diplomats from doing their jobs, which they see as ensuring the security and prosperity of the American people.

However, that conclusion is not obvious to many Americans. If anyone is responsible for their lack of understanding of the value of diplomacy, it’s the U.S. government. The last time a political leader properly explained to them what the United States was doing or about to do overseas — and why it was in their interest — may have been President Truman’s 1947 address to Congress, outlining what is now known as the Truman doctrine. Since those origins of America’s global-power status, when it made a huge investment in rebuilding Europe after World War II, U.S. dominance has grown exponentially, both militarily and diplomatically. During the Cold War, many Americans assumed that whatever their government was doing was to counter the communist threat, which was seen as existential to the Western way of life.

After the Cold War, both Republican and Democratic administrations developed an appetite for expanding the U.S. diplomatic presence to every corner of the world, ending up with 276 embassies, consulates and other missions — and after September 11, 2001, increasing the foreign affairs budget and the size of the Foreign Service. Washington decided that it should be involved in every major — and sometimes not so major — international issue of the day, and that it should help other countries improve their governance. But it never bothered to properly explain to the American people why that was in their interest.

Little wonder, then, that Trump has successfully persuaded millions of Americans that they have been disadvantaged by their own government’s foreign policies. Sure, some of us have been privileged to witness the positive difference U.S. diplomats have made in often difficult circumstances — and for less than 1 percent of the federal budget. But as far as many Americans are concerned, diplomacy hasn’t benefited their lives. They are puzzled by the number of embassies we have — they certainly don’t know what happens there — and some no doubt believe that we can do without a Foreign Service.

Those of us who see the tremendous value of professional diplomacy cannot assume that everyone agrees with us. We must tell the largely unknown stories of the diplomats who have persuaded foreign leaders to deny safe haven or cut financing to terrorists bent on attacking us; or to scrap local laws that could have harmed Americans or U.S. business; or to improve the way they govern their countries, so their citizens stay home and don’t cross our own borders illegally in search of better lives. We must tell the stories of the diplomats who ensure that U.S. companies are awarded foreign contracts that create jobs at home, and of those who help Americans in need or distress abroad.

It may fall on those of us outside the government to tell these stories, because, frankly, the State Department sucks at it.