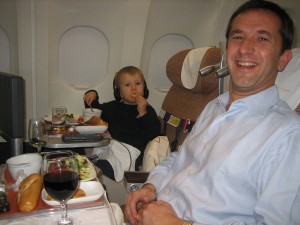 Mike Borsetti and his son, Roberto, on an Iberia flight.

Why is it so difficult for major U.S. airlines to be upfront with their customers? Their practices of advertising fares and marketing services remind one of that mysterious “Twin Peaks” revelation, “The owls are not what they seem.”

Last month, I wrote about fake “direct” flights — two or more separate flights that are sold as one under the same number, but are operated on different aircraft and sometimes require changing terminals. That often sends unsuspecting passengers running across the airport to catch what they discover is a regular connection.

The current holiday fare sale, initiated by Northwest Airlines in late October and matched by most other major carriers, is a perfect example. It’s fairly broad, offering discounted fares for Christmas and even bigger discounts for Thanksgiving.

“Cool deals and warm memories start at just $49*,” says Northwest’s Web site. As you probably guessed, the asterisk is essential. From the fine print, you can learn that “fares shown are each way” and “require a round-trip purchase.” American Airlines, Delta, Continental and United Airlines put that line at the top of the page, rather than the bottom.

So if a round trip is required to get the quoted price, why aren’t fares advertised in the actual amount you need to pay for a round trip? Why does it seem that airlines think they need to trick customers into buying a ticket by displaying only half of the price?

Because, said American spokesman Tim Smith, “the fares available each way are not always the same price in each direction, due to the number of bookings on each flight and availability of the lowest fares.”

But that’s irrelevant, said Mike Borsetti, an American passenger from San Francisco. Of course, you might end up paying different prices for your outbound and return flights, but a sale advertises the lowest fare in the respective market, regardless of availability, he said.

The more likely reason for that practice, Mr. Borsetti said, is that legacy carriers are trying to compete with low-cost airlines, such as Southwest and JetBlue, which advertise one-way fares, too. The difference is that those are actual one-way fares that come without the minimum- and maximum-stay requirements typical of the legacy carriers’ rules.

“Halving fares and advertising them as if you could buy one-way travel is confusing to the customer, unfair to the competition and ethically wrong,” Mr. Borsetti said. “Just like if Disney started advertising half-priced tickets that required the purchase of a similarly priced exit ticket.”

The only major legacy carrier that advertises full round-trip fares is US Airways. Taxes and fees are not included in the quoted price, as is the case across the entire U.S. industry.

Many travelers wonder why the Department of Transportation is doing nothing to compel the airlines to abandon the deceitful practice of advertising fares that are much lower than the price you actually pay. Earlier this month, the European Union imposed strict rules forcing carriers there to display the full price of a ticket, including all taxes and other charges, upfront.

“Fair competition is the key to success,” said EU Transport Commissioner Antonio Tajani. “With price transparency, passengers will know in advance how much they are going to pay and will be able to make informed choices.”

Some of the European carriers that fly to the United States, such as Spain’s Iberia, are honoring the new rules globally and displaying actual prices on their U.S. Web sites as well. But others, such as Air France and Germany’s Lufthansa, while observing the rules on their home turf, have given in to the pressure from their U.S. competitors and adopted the “one-way based on a round-trip purchase” policy.

“Because we think that customers are used to this and we want to offer them a price scheme comparable to those of other airlines, we adapted our policy to the common practice in the market,” said Lufthansa spokesman Martin Riecken.