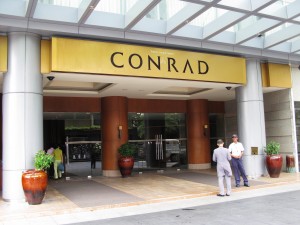 The Conrad Hotel in Bangkok (Photo by Richard Ehrlich)

An automatic upgrade to a hotel’s executive floor, including free access to its executive lounge, is one of the most cherished benefits of top elite status with large chains, such as Hilton and Starwood. So what do you do when it’s denied to you?

I tried to find the right answer to that question in Bangkok last week, but, of course, it depends on the reason for the denial — perhaps a lounge closure due to renovation or cost-saving by reducing staff — so I wanted to make sure I understood it well before complaining too much and asking for an alternative benefit during my one-night stay.

Many hotel programs used to offer free upgrades and lounge access to their gold members, but in the last year or so, they have limited them to the highest elite level — Platinum or Diamond, depending on the chain.

As a Diamond Hilton member, I was looking forward to staying at the Conrad hotel, one of the chain’s high-end brands, in the Thai capital during my trip to Asia with Secretary of State Hillary Rodham Clinton. The only three Conrad hotels in Southeast Asia — in Hong Kong, Singapore and Bangkok — are among the best in the world. Moreover, the last two can be real bargains at well below $200 a night during much of the year.

Usually, hotel lounges are on one of the top floors, offering spectacular views, which all three cities certainly have. Those three are particularly well-designed and boast great food and drink selections as well as exemplary service.

I’ve stayed at the properties in Hong Kong and Singapore several times but had only been to that in Bangkok once before, so I was excited to return after nearly six years. One of my good memories was from the lounge.

Even though the U.S. Embassy could have made a reservation for me, as all embassies do for the secretary’s traveling press corps, I made one myself to make sure the hotel had my Diamond number so I could get my upgrade. Then I passed on the reservation number to the embassy, which warned me that the upgrade “might not happen” because the executive floor would be “blocked” during Mrs. Clinton’s visit.

I attributed that warning to a misunderstanding and didn’t think much of it — after all, that had never been a problem in the past, and all reporters stayed on the executive floor and had lounge access at the Taj Palace hotel in New Delhi just a day earlier.

When I checked in, however, I was surprised to hear the same story about the executive floor and the lounge being off limits. The duty manager said he’d been told not to give me an upgrade or lounge access, although he acknowledged that I was entitled to them, and he needed to get permission from the embassy to do otherwise. He offered me “free” breakfast in the hotel’s cafe instead of the lounge, but breakfast was already included in the room rate.

I had a hard time understanding why a hotel would allow anyone from outside to dictate its policies, so I e-mailed the general manager, Manfred Pieper, to ask whether he took orders from the U.S. Embassy. Was this for security reasons? Or did Mrs. Clinton’s delegation want to have the lounge to itself? If so, would the embassy reimburse the hotel for having shut it down for loyal Hilton members who weren’t in the delegation?

Before I heard back from Mr. Pieper, another duty manager later in the day told me that there were no security concerns involved but that the embassy wanted exclusive access to the lounge and was paying for it. Then he offered me a free dinner as a substitute for the snacks I would have had in the lounge.

In the meantime, I asked the embassy whether it was spending American taxpayers’ money on a lounge, and as I expected, the duty manager’s story was disputed. In fact, I was told it was the hotel’s decision to close the lounge for regular guests. So I wrote another message to Mr. Pieper, asking if this was all a result of his desire to repay the embassy for bringing him significant business.

I never got a real answer to any of my questions. When Mr. Pieper finally responded at 11 p.m. on my only day at his hotel, he attributed the whole episode to “miscommunication.”

“At one stage, overall occupancy for rooms on the executive floors, including the group from the U.S. government, was forecast at a higher level, which would have meant for the lounge and rooms to be fully booked,” he wrote. “However, some bookings didn’t materialize as expected, and subsequently at the time of your arrival you should have been upgraded. I regret very much the explanation provided to you by our night manager when refusing to have you provided with the full benefits you are entitled to as a Diamond member — Hilton’s most valuable guests.”

Then, to “make further amends,” Mr. Pieper offered me “a complimentary upgrade to a suite during a possible next stay” or bonus Hilton points. I chose the points.