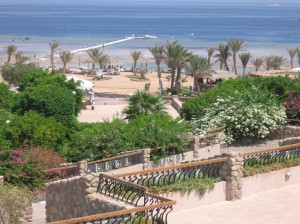 Fierce competition in the hospitality business is nothing new, but last week one of the world’s largest hotel companies took the game to a new level with a bold move aimed at enticing customers of a major competitor.

The InterContinental Hotels Group took advantage of many frequent travelers’ anger with Hilton Worldwide for devaluing its loyalty program, HHonors, last month and offered them bonus points if they also have an account with InterContinental’s scheme, Priority Club.

As I reported in November, Hilton decided to increase the number of points required for “award” stays at many of its hotels. It added a new Category 7 to its chart, and for a night at most of its high-end properties it now charges 50,000 points instead of the previous 40,000. Redemption levels at many other hotels jumped by 5,000 points.

A few days after my Nov. 9 column, I met Steven S. Sickel, InterContinental’s senior vice president for distribution and relationship marketing, who was in Washington for the company’s annual conference. He and his colleagues told me that Hilton’s move was the talk of the industry that week, and my column was making quite a few waves.

“In my 17 years in the loyalty business — first at Continental Airlines and now at InterContinental — I’ve never seen such a drastic devaluation,” Mr. Sickel said at the time.

Business executives usually criticize competitors in private, so I was surprised by Mr. Sickel’s on-the-record comment. He called on Friday to tell me that, when he and his team returned to their Atlanta headquarters after their Washington trip, they started thinking of a way to benefit from the frustration Hilton had caused its customers.

They came up with “The Luckiest Loser” campaign — if you “lost” Hilton points as a result of the devaluation, you can “gain back” Priority Club points. By Feb. 28, you have to send in your Hilton activity statement, and the least you will get is 1,000 points. If your HHonors account balance is among the top 20,000, Priority Club will give you 20 percent of that balance — and if it’s the highest, you will win 2 million points.

Frequent travelers and bloggers hailed the move as smart — even “brilliant,” as one of them, Joshua Mason-Barkin, put it. “It’s a nice dig at Hilton, and a way to maybe grab customers by pointing out the problems with Hilton’s devaluation,” he said. More importantly, InterContinental “figured out a way to get some of Hilton’s best customers to send them a document that lays out [their] booking, spending and redemption habits, said Mr. Mason-Barkin, who writes a blog on the travel Web site upgrd.com.

So what does InterContinental, which also includes the Holiday Inn, Crowne Plaza and other brands, intend to do with all that free information, for which companies are often willing to pay a lot of money?

Mr. Sickel said that “extra customer intelligence always helps to build a better relationship” with members, but he wasn’t sure what kind of targeted offers InterContinental might extend to Hilton’s top customers to increase the chances that they switch allegiance — if any. There were two main reasons for “The Luckiest Loser,” he said: to create good will among customers and to show “how broad-sweeping the emotion is” from Hilton’s devaluation.

Tens of thousands of people have already sent in their HHonors statements, and InterContinental has a “pretty rigorous screening process” and well-trained employees to guard against doctored documents, Mr. Sickel said.

What does Hilton, which also includes the Conrad, Embassy Suites and other brands, think about “The Luckiest Loser”? The company didn’t offer any public response last week, so I asked for comment.

Hilton also sent me some numbers that surprised me. Of nearly 3,500 hotels around the world, only 354 were assigned a higher category in January, and 547 actually decreased while the rest remained the same. In my search since the devaluation, I must have stumbled on at least a third of the 354, which are among the most popular properties.

Although the company said it didn’t want to put up a fight by attacking InterContinental’s move, it pointed out that, since the last HHonors devaluation in 2003, Priority Club has had two — in 2005 and 2007. It referred me to several threads on FlyerTalk, the largest online travel community, where Priority Club members harshly criticized those devaluations and the lack of advance notice about them. In contrast, Hilton warned its members nearly three months before the changes.

Since Priority Club is giving away so many points through “The Luckiest Loser,” many customers are concerned that another devaluation may be on the way. “It would be silly for us to do that,” Mr. Sickel said. “We have nothing planned in the immediate term. There will always be tweaks and turns, but nothing of the scope of what Hilton did.”