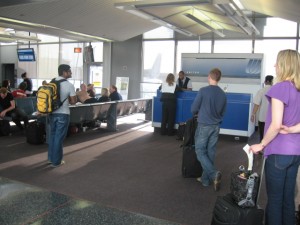 Just as many loyal United Airlines customers hoped that its expected merger with Continental Airlines would put an end to United’s massive blocking of “award” seats made available for mileage redemption by its partners in the global Star Alliance, the carrier made a government filing that raised new questions about its filtering policy.

With all the complex issues United and Continental have to resolve before completing their merger, which would create the world’s largest airline, the “award” blocking is hardly a top agenda item. In fact, I’d be surprised if it has come up at all in their negotiations so far.

However, it’s an important matter for many elite members of United’s Mileage Plus program, as shown by the overwhelming response to my original column exposing the previously secret practice in September 2008. A thread on FlyerTalk.com, the largest online travel community, that was started at the time has had more than 100,000 views and over 2,000 responses to date.

Although I haven’t dedicated a column to the blocking in a year, I continue to receive e-mail messages from readers, some of whom are just discovering United’s policy. Last week, a longtime frequent flier in New Zealand wrote me that he has unsuccessfully tried to use his United miles for seats on Air New Zealand repeatedly since last spring.

Every time the Star Alliance “award” tool on Japan’s All Nippon Airways’ website showed availability on the Air New Zealand flights the reader wanted, United agents told him they couldn’t see those seats on their computers. Moreover, the agents blamed Air New Zealand for not releasing any seats.

The reader asked that his name not be used, because he feared retaliation from United. “We don’t want to jeopardize our situation, as we have a ton of [United] miles and are still hoping to be able to use them.” He also wrote Air New Zealand about his experience.

United is the only Star Alliance carrier known to block otherwise available partner “award” seats. When Continental joined the 26-member group in October, it not only vowed not to filter other airlines’ inventory, but it also helped make United’s blocking more transparent by showing actual availability on its website, though it doesn’t have all Star carriers yet.

The blocking aside, Mileage Plus is considered a better program overall than Continental’s OnePass by many frequent fliers, who hope that United’s policies — including a more comprehensive upgrade offering for top elites, one-way “awards” and more generous customer-relations guidelines — will rule the new airline’s loyalty scheme.

At the same time, those fliers also hope that Continental’s top management, which is expected to lead the merged carrier despite the United name’s likely survival, will do away with the controversial “award” blocking.

United’s practice may have been denounced by customers as deceitful and dishonest, but it apparently has saved the carrier a lot of money in the past several years, because it hasn’t had to pay its partners for the seats it prevented Mileage Plus members from booking with their miles.

On April 23, United made a curious filing with the Department of Transportation. It said that, during the first quarter of this year, it “obtained additional historical data, previously unavailable, which has enabled [it] to refine” its estimates of the number of miles that will expire unused in customer accounts.

“This new data indicates that a larger number of miles than previously estimated are expected to expire,” the company said.

It’s also “making an improvement to the accounting model for Mileage Plus,” which “will result in the recognition of approximately $64 million of incremental passenger revenue in the first quarter of 2010, reducing the net amount of revenue that we otherwise would have deferred to future periods. The company expects a similar incremental impact in the remaining quarters of the year,” it said.

The reader from New Zealand said it’s “incredible that United would consider unused mileage as a profit to their company, especially if they are blocking members from using seats provided in good faith” by other Star Alliance carriers.

Accrued but unredeemed miles are considered a liability on an airline’s accounting books, and translating expired miles into revenue is a standard industry practice. The question United’s filing raises is how many miles expire unused because the carrier’s “award” blocking makes it impossible for those miles to be redeemed.

On one hand, it may be safe to assume that infrequent fliers are those who let their miles expire, and many of them don’t even attempt to book partner flights because they don’t know they can. On the other hand, United’s own “award” availability is often less generous than that of some foreign carriers, such as Germany’s Lufthansa. So if infrequent travelers fail to find seats on United’s website, which only displays United flights, they might give up and never use their miles.

In reality, there is no way to know for sure what role the “award” blocking plays in mileage expiration — if any. But this is a good time to bring customer dissatisfaction with United’s practice to the attention of both United and Continental executives as they decide on a way ahead for the combined airline.