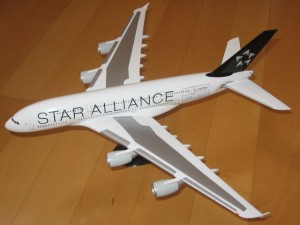 An airplane model of a Star Alliance A380.

I always enjoy dropping by the alliance’s modest office — not only because it’s an easy walk from the airport terminal, but also because just about everything it does is unique and pioneering in the industry. With 27 member-carriers, one would think it’s a grand operation, so I was surprised that fewer than 80 people work there.

As regular readers of this column have no doubt noticed, I’m a fan of airline alliances. Skeptics often point out the potential negative impact on competition and fares, but government regulators have designed mechanisms to maintain fair practices. Obviously, airlines have formed groups like Star, Oneworld and SkyTeam to boost their business, but, as I’ve written before, what is good for a company doesn’t necessarily have to be bad for customers.

There are many alliance benefits for frequent travelers: aligned flight schedules and seamless connections, interline ticketing and luggage handling, easier mileage earning and spending, as well as consistent elite perks across the alliance, such as airport lounge access and priority check-in.

Beyond the tangible benefits, however, I’ve loved flying on airlines from various countries and sampling bits of their cultures and traditions. In many ways, United Airlines is very different from Germany’s Lufthansa, which in turn is different from Singapore Airlines and South African Airways. Yet, every time I fly on those carriers, I feel a comforting sense of familiarity that comes from their belonging to the Star Alliance.

Star is the oldest and largest of the three alliances, with more than 21,000 daily flights to 1,167 cities in 181 countries. Brazil’s TAM Airlines’ joining earlier this month made it truly global by adding South America to its members’ home bases, which already included North America, Europe, Africa, Asia and the Middle East.

All that explains why Star’s round-the-world fares are usually higher than those of Oneworld, the group led by American Airlines and British Airways, and SkyTeam, which was founded by Delta Airlines and Air France/KLM.

As I wrote last year, Star raised some prices by up to $4,000 at the time — a move that surprised many frequent travelers, especially because it came during a global recession that badly hurt air travel. That trend continued this year, though the increases were less drastic.

Round-the-world fares are based on quotes provided by alliance members, so many of us wondered if a particular carrier might have pushed for higher prices, such as Singapore Airlines, which considers its product superior to those of its partners.

Jaan Albrecht, Star’s CEO, said there is no way to know what fare each carrier has proposed because of the “blind voting” the group uses to set fares. “Every airline sends blind information into a ‘safe haven’ whenever it wants. There is nothing we do — there are no meetings to discuss fares,” he said.

Christian Klick, vice president for corporate affairs, said the alliance does that “to be fully compliant with competition law requirements.” Star “facilitates the process, receives the fares from individual members, calculates the global fare, applies the current rates of exchange in order to come to local market fares for every region of the world and publishes these fares on all distribution systems,” he added.

The alliance has divided the world into 11 geographic regions or “points of origin,” and the fares are calculated based on a “standard formula” for every zone, and then published in each country’s currency, Mr. Klick explained.

Unlike in previous years, prices originating in different countries in the same region are rather similar, with the lowest coach fare in much of Asia, for example, about $3,200, business class about $8,500 and first class about $13,000. Just because two countries are neighbors, however, doesn’t mean there are no fare differences. While the quoted prices apply to China, if your trip starts in South Korea, you will pay about $2,700 for coach, $6,100 for business and $9,100 for first class. Out of the United States, those quotes are about $3,500, $10,500 and $15,400, respectively.

All those are just base fares. Taxes are an additional $400 to $600, depending on the itinerary and the carrier issuing the ticket.

“Still, the process is dynamic as it foresees so-called foreign exchange amendments at carriers’ request, and members can call for extraordinary amendments at any time if the competitive situation requires it,” he said.