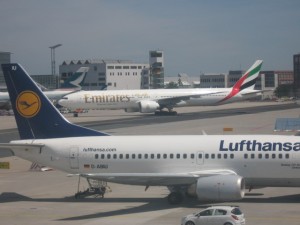 Lufthansa appears to have listened to the recent criticism of its decision to install its old angled business-class seats on the newly arrived Airbus 380 aircraft — finally, truly flat seats are planned when its first Boeing 747-800 enters service in late 2011.

Many Lufthansa customers were puzzled and disappointed when the German carrier didn’t bother to introduce fully flat beds on the A380. It was the perfect opportunity — the current seats have been inferior to those of many competitors for years and don’t quite fit the image of a leading airline, which Lufthansa certainly is. In addition, it rolled out brand-new first-class seats on the A380.

“The next major overhaul will be with delivery of the 747-8I in late 2011,” Lufthansa spokesman Martin Riecken said in an e-mail message. “We already have a test seat on one route, but the final design decisions are still not taken. We improved the current business class slightly with the introduction of the A380 in May this year — mainly ergonomic improvements.”

The company has attributed its decision to stick with the old seats to the delayed A380 delivery, saying they were appropriate when the aircraft orders were first made. It’s unclear, however, if Airbus would have allowed Lufthansa to changed its mind, given that interior work didn’t start until just months before the first delivery in May.

It’s unlikely Lufthansa tried to amend its order, judging by its leadership’s previous comments that the old seats, which are lie-flat but not horizontal to the floor and were first installed in 2003, were sufficient for the time being.

“Our existing seat is not at the very top of the market compared with certain [business class] seats offered by some carriers,” Marianne Sammann, general manager for Lufthansa and Austrian Airlines in Britain and Ireland, was quoted as saying in a Wednesday article in Britain’s Business Traveller magazine. “Perhaps with hindsight we would have considered an alternative, but at the time of ordering the A380 our existing seat was the right product.”

Interestingly, Singapore reacted to the A380 delay differently from Lufthansa — instead of waiting, it installed the new seats on an order of new Boeing 777-300ER aircraft, which began arriving in 2006.

United Airlines rolled out its new seats in 2008, though it has retrofitted only about half of its fleet so far. Still, those seats are much better than Lufthansa’s, and while United’s soft product may not be as good as Lufthansa’s, United is my choice on an overnight flight to Europe.

Last year, Swiss International Airlines put fully flat beds on its new Airbus 330-300 planes, but it currently has only eight of them. Both Swiss and Austrian are owned by Lufthansa, though Austrian’s hard product is inferior to the other two.

Outside the Star Alliance, Air France, Australia’s Qantas Airways and Emirates all introduced new truly flat beds on their A380 aircraft. Air France, however, also disappointed its customers recently by announcing plans not to install the new seats on other aircraft types.

Lufthansa has 15 A380 planes on order, with the option to buy another five. No details about the new business-class seats are available yet, but it’s clear it will take a few years for its entire fleet to be reconfigured.