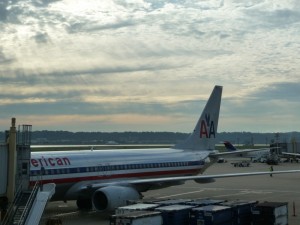 American Airlines has been trying to cut booking costs by fighting to reduce the power of the Global Distribution Systems (GDS) — and the high fees they charge. However, its own ticketing process remains surprisingly outdated for one of the world’s largest carriers, and far from being cost-efficient.

It wouldn’t be difficult for American to save millions of dollars a year. All it needs to do is implement instant ticketing, which most other major airlines have had for years. The carrier says it plans to introduce instant ticketing on its website later this year, but it has no intention to allow phone reservation agents to issue tickets at this time.

“Several technology improvement processes are currently underway, which will ultimately allow instant ticketing for various functions. It won’t happen all at once, but will phase in during the second half of this year, with everything completed by the end of the year under the present schedule,” American spokesman Tim Smith said in an e-mail message.

“For now, our reservations group and its agents will continue to use their existing ticketing system,” he added. “They will, of course, monitor the situation once it’s up and running on AA.com to determine whether any changes are needed with the reservations ticketing model.”

Currently, when you purchase a ticket on AA.com or by phone, your reservation is queued up for ticketing by a dedicated department, which is the only one authorized to process credit cards. If your card is rejected, an employee is supposed to call you and let you know.

That happened to me last month — sort of. I bought a ticket on a Friday on AA.com for travel on the following Tuesday, which should have given it priority in the pipeline before reservations for later dates. But six hours later, the ticket wasn’t issued. I called American and was told there was a problem with the credit card. How was I supposed to know that? No one called or e-mailed to tell me. After I gave the agent a new credit card, it took another eight hours for the ticket to be issued.

In contrast, when you buy a ticket from other major airlines, including United, Emirates and British Airways, you get a ticket number right on the spot — both from phone agents and on their websites. If your credit card doesn’t go through, you are told immediately, so you can react. Just yesterday, I issued a ticket on the Emirates website — it took about 10 seconds.

Imagine how much money American would save if it eliminated the middleman — the so-called ticketing department — in every single purchase. Of course, every airline needs and has a ticketing department. But all those other carriers use it only in special cases, mostly when manual ticketing is required as a result of changing an existing ticket or when the computer fails to price out a ticket automatically.

There is actually another middleman when issuing American award tickets. After you make a purchase online or with an agent, it’s queued up first to the AAdvantage Customer Service. Why? Because that department deducts the miles from your account and verifies that your award complies with routing and other rules. Apparently, American has no trust in its dedicated AAdvantage agents or its automated computer system. Only after that is the reservation queued up to the ticketing department.

Last week, it took American four days to issue an award ticket. I was told that the AAdvantage Customer Service is closed on weekends. About the same time, I got a United award ticket — it took the United agent about five seconds to issue it.

Part of me is glad that many people have jobs, but the other part wonders why American is wasting so much money on creating work for two or three people when those functions can be easily accomplished by one employee.

“Any additional costs associated with our current system is offset by a different aspect of cost-savings for both the airline, the card issuer, and the cardholders,” said Smith, the spokesman. “The current process allows us to do additional card verification and transaction analysis that benefits all parties and help keep costs down. Simply put, less cost from fraud.”

Obviously, fraud is a major issue, but other airlines and companies have found more efficient ways to deal with it. Apparently, American recognizes that, too, since it plans to implement instant ticketing on its website.

Why does it matter when a ticket is issued? I’m told the American system is programmed to hold a reservation for seven days before it gets canceled, which is plenty of time. But what if a booking falls through the cracks, especially if there is a credit-card problem? In addition, if the itinerary includes flights on partner-carriers, those airlines may cancel their seats if they don’t get a ticket number from American by a certain deadline.

One huge advantage of AA.com is that it allows customers to hold a reservation for 24 hours for free before buying it. United’s decision last year to remove that option from its site has caused immense inconvenience to numerous customers. Most airlines, of course, don’t provide a “hold” option online, while others charge a fee for it. Sure, many carriers permit free refunds within 24 hours of ticketing, but that’s not the same thing.