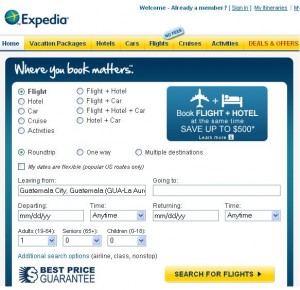 Expedia, the most popular online travel agency, agreed to the terms of American Airlines, which gave up some ground, too.

The new airline data distribution model I predicted in February has just become a reality. Expedia, the most popular online travel agency, agreed this week to carry American Airlines data hosted by the carrier’s “Direct Connect” channel. Expedia’s consolation prize is that it will use Global Distribution System (GDS) aggregation technology.

Since Dec. 31, when its contract with American expired and it decided not to renew it, Expedia had been resisting the airline’s attempts to move to a direct channel. Why? Because it wanted to continue to receive sizable kickbacks from Sabre, the GDS it uses to display and book flights.

American insists on “Direct Connect” for two reasons. First, the channel allows it to control how the data is displayed and offer customized options to travelers, such as priority check-in and boarding, which will increase revenue. Second, the cost of “Direct Connect” is much lower than the GDS fees American used to pay Sabre, which has its own quarrel with American.

After a January visit at Farelogix, a Miami-based technology company that is building direct data-hosting and distribution channels for about a dozen airlines, I suggested that a solution to the dispute between American and Expedia (as well as Orbitz) may be a hybrid model.

As Farelogix CEO Jim Davidson told me, the GDS system is not going anywhere, and it provides the best and fastest data distribution. No airline is disputing that or trying to make the GDS model obsolete. But there is a way to integrate “Direct Connect” in a GDS. All three GDS companies — Sabre, Amadeus and Travelport — have been bad-mouthing “Direct Connect” because they stand to lose lots of money.

Now Expedia has realized that a hybrid model is the future of airline data distribution. Instead of fighting it, the GDS companies should get over the past and help to improve the new model, so consumers have the best possible information when comparing prices across airlines.

Until the new system is in place, Expedia will use the existing GDS model to display and book American flights.