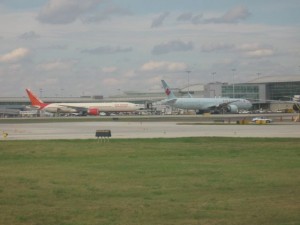 An Air India aircraft (left), next to an Air Canada jet, at Toronto International Airport.

The Indian government is engaging in apparent blackmail of the Star Alliance, following the global airline group’s rejection of Air India’s membership application. New Delhi’s threat to take away traffic rights from Star members is about to test the diplomatic skills of both the affected carriers and the alliance leadership.

As I wrote in August, Star really, really wanted to add Air India to its network, because of the large and fast-growing Indian market. It spent more time, effort and money on helping Air India meet the membership requirements than it has with any other candidate. At the end, however, Air India’s entrenched corporate culture and internal Indian politics became unbearable, and the alliance gave up.

New Delhi wasted no time devising retaliation. Within weeks of Air India’s rejection, the government informed Austrian Airlines and Swiss International Airlines that their traffic rights are in danger, as reported extensively in the Indian press. The official reason was the two carriers’ ownership, in which Germany’s Lufthansa has controlling stakes.

That, of course, has been the case for years, and no one believed this was the real reason for India’s threat. It made another move, refusing to grant landing rights in New Delhi to Lufthansa’s Airbus 380. This time, Indian officials didn’t even try to hide the linkage to Air India’s failed Star application, accusing Lufthansa of sabotaging the Indian bid.

A couple of weeks later, reports appeared in Indian newspapers that Star and Air India had resumed negotiations. That sort of made sense, given India’s multiple threats, but the only sources in those stories were Indian officials — confirmation from Star was suspiciously missing.

It’s high time the Indians rethought their priorities and tactics. Blackmail is not the best strategy to earn international respect and recognition for your national carrier.

In the very first column I wrote about Star in 2008, I argued that leading an airline alliance is essentially practicing international diplomacy. The main subject in that piece, then-Star CEO Jaan Albrecht, recently became CEO of Austrian Airlines, so one of his first orders of business was dealing with India again. As if he didn’t have enough of that in the last four years.

AirIndia had no chance with Star Alliance