Why airline alliances are good for fliers 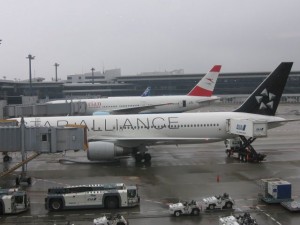 Each Star Alliance member-carrier has aircraft painted in alliance livery.

The Star Alliance’s 15th birthday this month reminds me that a global airline alliance is one of the most fascinating concepts in the history of commercial aviation. It’s also an example of the airline industry’s creative thinking aimed at increasing revenues. However, unlike some of the questionable practices I described in “Decoding Air Travel,” this one has dramatically improved the customer experience.

It’s fascinating for me personally, because it combines my two passions and areas of expertise, international affairs and air travel. In fact, what alliance executive teams do every day is nothing short of diplomacy. International negotiations and dispute resolution are two of their specialties, and a big part of their duties is selecting new members, not unlike NATO and the European Union.

When Star was formed in 1997, the idea was not only to represent its members’ best interests — that’s primarily the job of trade associations — but to boost business by feeding passengers from one carrier to another in the smoothest possible way. Soon, airline diplomacy began in earnest — first among alliance members, which after all are rivals in a fiercely competitive industry, and then with airports, transportation authorities and governments around the world. The other two global alliances are Oneworld and SkyTeam.

“Much of what we do is diplomacy,” Jaan Albrecht, Star’s former CEO, told me when I first met him in the alliance’s Frankfurt office in 2008. “We try to educate airports, publics and governments about the benefits that come from a network like ours.” Albrecht is now CEO of Austrian Airlines, a Star member.

The benefits for customers that come with an alliance membership are both tangible and intangible. The first category includes interline ticketing and check-in, harmonized schedules to provide seamless connections, worldwide lounge access, mileage-earning and redemption opportunities, as well as elite-status recognition across the alliance, and round-the-world and other special-fare products.

It’s also important to appreciate the intangible benefits. The most important to me is that the experience on an alliance’s various carriers is so similar and yet so different. I like the predictability created by consistent and aligned policies — knowing how things work and what to expect gives me comfort at the airport and in the air. At the same time, I love the individual touches that each airline adds to the travel experience, based on its national, cultural and even corporate uniqueness.

For example, Scandinavian Airlines and Thai Airways are both Star members, and technically there is no difference which one you are booked on — you will earn miles, check-in all the way through to your final destination and access their lounges anywhere in the world. But when you enter a lounge or board a plane, you will never confuse Scandinavian with Thai.

Critics of the alliance concept usually argue that consumers suffer, because closer cooperation among airlines leads to higher fares. They refer to special arrangements, known as anti-trust immunity exceptions, which are granted to some carriers so they can coordinate fares, schedules and inventory on certain routes. The largest members of the three alliances have received such waivers on intercontinental routes. Some have gone a step further, securing approval to operate certain routes as a joint venture. Price-fixing is illegal, so these carriers needed the exceptions to publish identical fares — and if you compare their tariffs, you will see they are indeed identical.

When granting the immunity, the Department of Transportation is careful to exclude routes on which the only existing service is provided by the carriers seeking the waiver — those exclusions are known as “carve-outs.” So the government is supposed to protect consumers, and it seems it’s doing its job. Overall, there is no question in my mind that airline alliances have had a positive impact on customers.

All three alliances have had troubles lately, as member-carriers have experienced hard times, filed for bankruptcy or disappeared all together. But that’s the nature of the airline business. My only criticism is that none of the groups has done a good job at reaching out to a broad audience to explain and promote the benefits I described above.

Here is the current membership of each alliance: