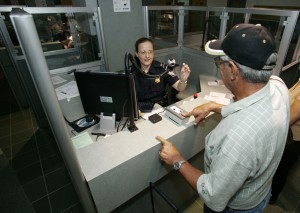 A Customs and Border Protection officer takes a passenger's fingerprints upon arrival in Washington. (CBP photo)

It’s a particularly good time to do that, because after March 20, the Department of Homeland Security will impose fines on airlines that transport visitors with neither a visa in their passport nor approval by the new Electronic System for Travel Authorization (ESTA).

The fines will be $3,300 for each non-compliant passenger, said Joanne Ferreira, a spokeswoman for the department’s Customs and Border Protection (CBP) division.

ESTA was introduced in January 2009 for citizens of 35 developed countries — most of them in Europe but a few in the Asia-Pacific — that are part of the so-called visa-waiver program. CBP set up a Web site where travelers can fill out a form and get approval for what is effectively an electronic visa, in most cases almost immediately.

At the end of the free application process, you get an authorization confirmation page with your ESTA number valid for two years, which you are encouraged to print out, though carrying a copy with you is not required.

All airlines flying to the United States from abroad began linking their computer systems to the ESTA database, so that an agent can find a specific authorization simply by entering a passenger’s name and passport number. Carriers serving Australia have been using a similar process for years to comply with that country’s entry requirements.

The U.S. government gave airlines and travelers a year to prepare and learn how to use the new system. Since Jan. 20, controls have been put in place to make sure that no boarding passes are issued to passengers without an ESTA. So naturally, travelers are very much dependent on airport agents, some of whom are reportedly making up rules.

During the first week of ESTA’s mandatory implementation, I received a complaint from a British citizen who had been denied boarding in London, even though she’s had an ESTA since last year. The traveler, who asked not be named, said an agent insisted that authorizations granted before Jan. 20 were no longer valid, and passengers had to reapply.

Ms. Ferreira said that is not the case, and every ESTA — regardless of when it was issued — can be used for multiple entries to the U.S. until its two-year expiration, unless it has been revoked for security or other reasons. However, she noted, if you change your passport in the meantime, you must get a new ESTA, because the one you have was linked to the original passport number.

Last month, Felix Margadant, a Swiss traveler, had his own frustrating experience with an agent in Buenos Aires.

During check-in for a flight to Washington, the agent demanded a printed copy of Mr. Margadant’s ESTA. He didn’t have one, but he opened his laptop and showed the agent the approval form he had saved there, including a note on the page from CBP that it “recommends you print this screen for your records, but you will not be required to present a copy of your authorization in order to travel.” The agent remained “unimpressed” and sent Mr. Margadant away without a boarding pass.

“I have now 20 entries to the U.S. since ESTA was enacted, and this was the only time I have ever been demanded to provide a printout,” said Mr. Margadant, who found another agent willing to give him a boarding pass without a problem.

Ms. Ferreira confirmed that printouts are not required and was puzzled by the first agent’s reported behavior. As long as the airline’s computer finds a passenger’s valid ESTA number in the database, and there are no other complications, agents should have no trouble issuing a boarding pass, she said.

Most of us have encountered self-important airport agents, so when you know you are right, don’t give up without speaking to a supervisor.

Despite the mandatory ESTA requirement, more than 5 percent of visa-waiver travelers have arrived in the U.S. without an authorization since Jan. 20, Ms. Ferreira said. When they appear before a CBP officer, “they get notified that they are not compliant with ESTA and given a tear sheet that explains” the process, she said. “If the officer believes the traveler needs further inspection, the traveler goes to secondary” screening, which can happen even with visitors holding an ESTA or a regular visa.

If you don’t have an ESTA yet but plan on traveling to the U.S. at least once in the next two years, now is the time to apply. A $10 fee will be imposed soon. As I wrote in September, the charge has nothing to do with CBP, but is supposed to benefit a public-private fund to promote tourism to the U.S. The so-called Travel Promotion Act cleared all hurdles in Congress last week, and President Obama is expected to sign it into law later this month.

U.S. travel industry groups welcomed the new fee, but European Union called it “questionable” and “paradoxical” and threatened to retaliate with a similar measure.

Ms. Ferreira said CBP will have to redesign the ESTA Web site to add a payment capability, but it’s not clear how long that process will take.