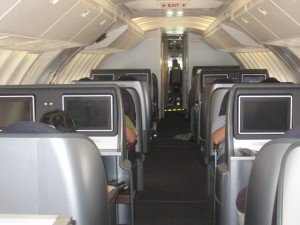 United Airlines' business-class cabin on the upper deck of a Boeing 747.

Should the new United Airlines have international first class, like the old United, or not, like the old Continental Airlines? Most frequent fliers expect a decision in favor of one of the two models, but why not go with a mixed model? Why not keep first class on routes where it makes business sense, and fly two-cabin planes where it doesn’t?

Since the two carriers’ merger was announced in May, there have been many opinions in online travel forums advocating just coach and business class, but it’s hard to see the world’s largest airline without long-haul first class at all. Continental may call its premium cabin BusinessFirst, but it’s business class.

In addition, United has already installed new first- and business class seats on more than half of its wide-body fleet, and it makes little sense to now remove first class and expand business class.

Regardless of the mechanics, there are routes that can sustain first class and actually make money, especially now that business travel has recovered from the slump during the global recession. Wouldn’t it be a luxury for United to pick and choose the routes on which it operates three-cabin planes and even change them seasonally?

Many foreign airlines have flown both two- and three-cabin aircraft on long-haul international routes for years, including United partners in the global Star Alliance, such as Lufthansa, Thai Airways and Asiana Airlines. In fact, Asiana currently flies one two-cabin and one three-cabin plane daily between Seoul and Los Angeles. In the Oneworld alliance, British Airways, Cathay Pacific and Qantas use a mixed model.

If you look at the loads in both first and business class on all those carriers, you will discover that they are selling extremely well — many flights in the next few weeks are actually sold out. As I reported last year, the recession forced some airlines to cut back on first-class service temporarily, but things now are very different.

So let’s not count United’s first class out quite yet.