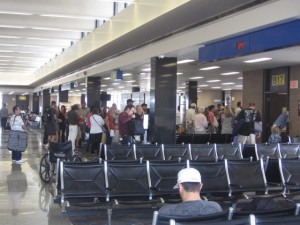 Passengers board a flight in Omaha, Neb.

As if the existing methods to overcharge travelers weren’t enough, some airlines have just found a new way deeper into your pockets. It comes in the form of sophisticated software designed to increase prices based on your desperation and lack of choice. Will you fall for the latest gimmick?

The new application is courtesy of Amadeus, one of the major distributors of airline and other travel-related data worldwide. This week, it announced the launch of “Active Valuation,” an “IT solution that enables airlines to maximize revenues across multiple channels,” or to charge you more for something you can otherwise get at a lower price.

Amadeus was surprisingly open about how it will help carriers to take more of your money, although it makes marketing sense to point that out in order to attract airlines to sign up. Amadeus already has contracts with several major airlines, including Lufthansa, Singapore Airlines, Brazil’s TAM, the United Arab Emirates’ Etihad and Air Baltic. The first three carriers are members of the global Star Alliance.

“‘Active Valuation’ works by enabling the application of sophisticated business logic to dynamically adjust the yield (revenue expected) of an airline product, according to the context in which a booking is made,” Amadeus said in a statement posted on several travel news sites.

“These yield modifiers are used in a seamless manner in order to perform an origin and destination calculation,” it added. “This allows a dynamic segmentation of customers, taking into consideration their characteristics, the point of sale used and any connecting flight data, in order to better capture their willingness to pay.”

My feelings about this statement are strong and mixed at the same time. On one hand, Amadeus obviously deserves credit for developing a new product that will no doubt boost its business. On the other hand, “Active Valuation” sounds like a recipe for screwing consumers over big time.

How does this work? If you live in the United States and want to buy a plane ticket between two European cities, you may be paying more than someone who makes the purchase in Europe. The airlines are banking on your lack of knowledge about European fares and betting on your willingness to spend more money than a European traveler, who can distinguish a good fare from a bad one.

As Amadeus pointed out this week, airlines have been doing similar tricks for years through their inventory management and are now simply expanding them. “For example, when a customer requests availability information for a multi-leg journey, the solution automatically considers the complete value of the trip and delivers appropriate availability information to the customer,” it said.

What does that mean? Let’s say you need to go from Washington to Hong Kong — there are no nonstop flights on that route, so you’ll connect in Chicago. Let’s assume that the Washington-Chicago flight has availability in the lowest booking class, as does Chicago-Hong Kong. However, when those two segments are “married up” to produce your connection, the lowest-priced seats would often disappear, and you’d have to pay for a higher booking class, which could mean hundreds of dollars more.

None of the major U.S. carriers uses Amadeus, but American Express and Carlson Wagonlit, two of the country’s largest travel agencies, do. It also powers online booking engines, such as Expedia and CheapTickets. Plus, if Amadeus figured out how to do those new gimmicks, its competitors won’t be far behind.

So how would you fight against all those airline attempts to “maximize revenue”? Demand an addition to the Passengers Bill of Rights? Complain to your congressman? Good luck. We live in a capitalist society, and every company has the right to maximize revenue in any legal way it can find — although some have found questionable methods, such as the fake “direct” flights I wrote about last month.

As you might have guessed, my approach is education — learn as much as possible about what the airlines do, and about the entire air travel system, and beat them at their own game. If you don’t know that something is happening, how would you know how to avoid it?

In my last column, I explained why corporate travel lacks innovation. One of the reasons is companies’ heavy reliance on old-style travel agencies, which in turn rely on computers to tell them what to do. The result is millions of dollars in unnecessary spending.

The Amadeus announcement is another reminder that if you keep using the old approach, you will continue to waste money. My method is simple: having mastered the system and its intricacies, I rely on my knowledge and experience buying tickets and flying around the world — that’s how I beat the computer.

Is that good enough advertising for my “On the Fly” Seminars and the Kralev International advisory services?

In all seriousness, this summer I decided to dedicate myself to travel education, even though such a concept doesn’t even exist, and I’m probably the only person who uses the words “travel” and “education” together. I’ll continue to preach it until people start listening.