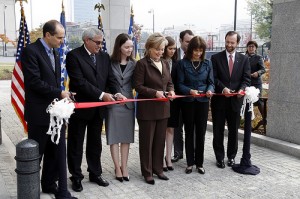 Secretary of State Hillary Clinton cuts the ribbon of a new U.S. embassy compound in Bosnia and Herzegovina on Oct. 12, 2010. (State Department photo)

The general public usually hears about diplomats when there is a spy scandal, or when a diplomat is arrested for selling U.S. entry visas to foreigners — for money or sex.

Members of the U.S. Foreign Service often complain that it’s an unknown entity to the very people diplomats represent abroad. My extensive research in the last seven years confirms that concern. Most Americans have no idea what their representatives do every day — and many have no interest in learning about it, either.

How can that change? Although individual diplomats sometimes give talks at universities and other venues, there is much more the State Department can do in a concerted effort to educate Americans. For decades, the department was banned from interacting with domestic audiences — not to be seen as engaging in propaganda — but times have changed, and the substance of the outreach I have in mind would be very different.

My press colleagues and I have witnessed many excellent town-hall meetings Secretary of State Hillary Clinton has done around the world. It’s easy to see the tremendous impact those exchanges have on the people in those rooms. Why not hold such events in the United States? The interest in Clinton’s persona could translate in more curiosity about diplomacy and the Foreign Service.

In fact, this is a good time for a public discussion of the future of diplomacy and the Foreign Service.

The duties of Foreign Service officers have changed so much in the last two decades that they no longer truly reflect the traditional job description of a diplomat — helping to defeat an insurgency is certainly not what most people expect when they join the service.

The Oxford English dictionary provides two definitions of diplomacy. The first is “the (skill of) management of a country’s affairs by ambassadors and ministers living overseas,” and the second is “(the skill of) dealing with people so that business is done smoothly.”

During my visits to more than 50 U.S. embassies and in interviews with hundreds of Foreign Service officers, I got the sense that many of them were confused about what exactly they were supposed to be doing and why. The problem was not that they were sitting around with nothing to do, but that there was a lot to be done, and to prioritize well, they needed to know what exactly was expected of them.

In recent years, diplomats have been asked to prevent conflicts, broker peace, drum up support for war, sell unpopular policies, help build nations and improve America’s image abroad. They have stretched the definition of a diplomat to include everything from a diligent bureaucrat with good analytical and writing skills who knows the workings of Washington, to a charming and persuasive socialite, to a fearless mover and shaker venturing into war zones.

But should all Foreign Service officers be doing all those things? If the answer is yes, the State Department should make significant changes in the way it recruits, trains and promotes American diplomats.

More broadly, what kind of Foreign Service should the United States have in the 21st century?