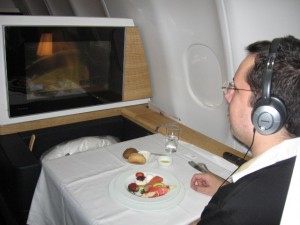 Rankings are usually administered by various magazines — one exception are the new Frequent Traveler Awards. In the last several years, I’ve made it a habit to look at the Global Traveler Magazine‘s so-called Tested Awards, most of which make sense. However, as I was reading this year’s results during a flight last week, I couldn’t help but gasp in astonishment at some of the results.

Many of the categories are certainly subjective, and different people’s experiences could easily be different. For example, the in-flight service on the same airline could vary depending on the cabin crew — or even your particular flight attendant.

Still, Lufthansa’s second place for best First Class is surprising. For comparison, Emirates is fifth, Korean Air sixth, and Singapore Airlines eighth. Seriously? Lufthansa is a great airline and it deserves to be in the top 10 — it came out fifth overall in the “Best Airline in the World” category.

But anyone who has flown in Lufthansa First Class in the last couple of years knows that its hard product lags behind most of its competitors. The most glaring example of that is the tiny TV screen. On the carrier’s Boeing 747 aircraft, First Class is on the upper deck, with 16 seats in a 2-2 configuration, which is the standard for Business Class on most other airlines operating the same aircraft type.

To its credit, Lufthansa has recognized the limits of its product and has undertaken steps to improve it. The above-mentioned 2-2 configuration is about to change to 1-1, which will no doubt disappoint some fliers because it will reduce the number of First Class seats by half, but eight seats is the industry standard and makes a lot of sense.

Lufthansa has finally come out with a new First Class seat on its Airbus 380 planes. Could it be that Global Traveler readers were evaluating those seats? No, because surveys were collected between January and August, and the first Airbus 380 didn’t enter service until late August.

There is one First Class feature on Lufthansa that beats all other airlines to the punch: its First Class Terminal in Frankfurt. But it’s used almost exclusively by Frankfurt-originating passengers, so it’s unlikely its weight in assessing the overall product was predominant for all survey respondents.

Lufthansa was also ranked fifth for best Business Class. Again, if you’ve had a chance to compare its hard product with other Business cabins, you’d probably disagree. One could argue that Lufthansa’s service is better than that of United Airlines, but United’s truly flat seats are among the best in the industry. Lufthansa made the short-sighted decision to install the old Business seats on the Airbus 380, but later announced it would roll out a new hard product next year.

United is the only U.S. carrier in the top 10 of any of the leading overall global categories, taking 10th place for best Business Class and best Business seat design, and fourth place for best First Class design. Its “new” hard product, which was first introduced three years ago, has so far been installed on less than 60 percent of its long-haul fleet.

Deservedly, Lufthansa is missing from the top 10 in any of the best-seat categories. But another perplexing presence in the best Business seat category — ahead of United — is South Korea’s Asiana Airlines. Not only are its current seats not truly flat, but they are less comfortable than comparable products on other carriers, such as Thai Airways. Asiana’s service is, of course, superb, but this is strictly a seat-related category.

In the best global airport category, another surprising result: in third place, Amsterdam has beat out Hong Kong and Munich. In North America, Atlanta came out ahead of San Francisco. Really?

Oh, and did you know that Delta Airlines has the best airport lounges in the world? That’s right, and Lufthansa and Singapore Airlines have been shut out of the top 10 completely. If that’s not madness, I don’t know what is.