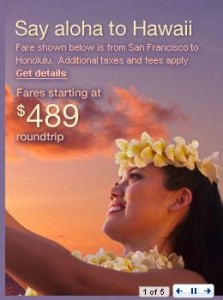 A United Airlines fare advertised on the carrier's website.

When I wrote about false fare advertising in 2008, my copy editor at the Washington Times put this headline on my column: “Fare sales often lost in translation.” I compared the deliberately misleading airline practice to the mysterious “Twin Peaks” revelation “The owls are not what they seem.” I also wondered, If a round trip is required, why on earth is only half of the actual fare being advertised?

This month, United Airlines became the first major U.S. carrier to change its policy and advertise predominantly round-trip fares on its website — the only exceptions seem to be last-minute weekend specials. The airline is currently promoting five domestic and four international sales on its site, and they all include round-trip prices and fuel (YQ) surcharges — though some taxes and fees are excluded.

For example, a Business Class fare for a round trip from Los Angeles to Shanghai is shown as $3,513, while the total final price as of today is $3,572, if booked on nonstop flights. A round-trip Business Class fare from Washington to Rome is displayed as $2,411, and the final price is $2,460, if purchased today on nonstop flights. As you see, the differences are not that big.

All other carriers should follow suit. Continental and US Airways display some fares as round trips, but most of their advertising is still being done the old-fashioned way, as is American’s and Delta’s. Southwest, Alaska Airlines and Virgin America show one-way fares but don’t require round-trip purchases.

Although the Department of Transportation has looked into the issue and called on the industry not to deliberately mislead consumers, it has done nothing to stop the controversial practice. The European Union (EU), on the other hand, has been much more proactive on behalf of travelers. That’s why fares in Europe are advertised with the full ticket price.

Some of the European carriers that fly to the United States, such as Spain’s Iberia, are honoring the EU rules globally and displaying actual full prices on their U.S. websites as well. But others, such as British Airways, Air France and Lufthansa, while observing the rules on their home turf, have given in to the pressure from their U.S. competitors and adopted the “one-way based on a round-trip purchase” policy.

In January, all four above-mentioned European airlines offered the same fares from New York to London. The last three advertised $199, while Iberia showed $584, which is what the actual fare was, including all taxes and surcharges. Singapore Airlines, also having the guts to be honest with its customers, promoted a $586 fare from New York to Frankfurt that was truly the final price.

It’s high time the airline mentality of trying to trick customers changed once and for all.