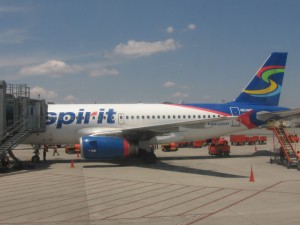 Have you ever been told by an airline agent that you had missed the check-in deadline, even though you arrived at the airport well before the published cutoff time? That happened to dozens of Spirit Airlines passengers this week, but it’s nothing new. Agents have been abusing customers for years and have even made them pay penalties.

A former intern of mine told me once that he was returning home to Washington from Las Vegas with a friend when an agent declared it was too late to check them in. At least the agent was honest and admitted that the fault wasn’t theirs. Technically, there was still time before the deadline, but the flight was overbooked. Because the two passengers didn’t have seat assignments and the plane was already full, there was no space for them — despite the fact that they were holding confirmed and paid tickets for the flight.

The agent was not only honest but incredibly arrogant, making the students pay a $150 change fee each to get on another flight. The young men didn’t know better as to stand up for their rights and ponied up the penalties. So the airline, which had overbooked the flight and made money from more passengers than there were seats for on the aircraft, ended up making even more money from apparently inexperienced travelers.

There should be serious penalties for airlines in such cases, because that’s a clear violation of Department of Transportation rules on overbooking. The customers should have been compensated, not shamelessly gouged and taken advantage of.

Obviously, I only have one side of the story, and while I’m not trying to excuse the airline agents who abuse paying customers in this disgraceful manner, there are two basic things the young travelers could have done to prevent the situation they found themselves in.

First, they should have had seat assignments. I realize that sometimes there are no available seats at the time of purchase, or the only seats left may require additional fees. But, as I pointed out in Decoding Air Travel, seats are likely to open up, so checking the seat map from time to time could solve that problem. The second thing is online check-in, starting at 24 hours or more before departure. I continue to be utterly perplexed by how many passengers choose to wait in lines instead.

Again, I’m not trying to excuse the apparent abuse by airline agents, but travelers should know basic rules and their rights, so they don’t allow agents to take them for a ride.