Talking air travel for an hour on NPR

HomeTalking air travel for an hour on NPR 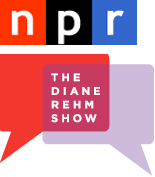 Air travel is one of those topics that no radio or TV show can go wrong with — it’s certain to touch a nerve with many people and provoke numerous comments and questions. That’s what happened yesterday on NPR’s Diane Rehm Show, which I was on for the first time.

I always thought the reason to be invited would be to talk about foreign policy on the Friday news roundup, where Diane has three Washington journalists discussing issues from the passing week. That never happened, but a couple of weeks ago I suggested to one of the show’s producers that the summer is a good time for a program on travel.

The Diane Rehm Show is widely considered the best talk show on NPR, with more than 2 million listeners a week. It’s produced by WAMU, the NPR station in DC, and airs in dozens of markets across the U.S. Diane is on vacation this week, so the guest-host was Frank Sesno, a former CNN bureau chief in DC who now heads the George Washington University’s School of Media and Public Affairs.

There were two other guests except me: from Dallas, Scott McCartney, who writes “The Middle Seat” column for The Wall Street Journal, and from New York, Susan Stellin, a New York Times contributor.

You can listen to the show and read some of the comments left by listeners on its website. We actually got hundreds of comments and questions by phone, e-mail and on Facebook and Twitter.

We talked about various familiar topics, such as airline fees, seats, delays, the proposed Passengers’ Bill of Rights, re-regulation prospects and others.

Since the show’s topic was “Navigating the not-so-friendly skies,” I wanted to offer some advice on how to do that. The main point I tried to make was about the need for travel education, realizing that most people don’t see such a need because they think they know how to travel. But if that were true, we’d be hearing many fewer complaints and horror stories about air travel.

It’s convenient and popular to blame the airlines all the time — and they often deserve much of that blame — but there is a lot travelers can do to make their own experience less stressful and more seamless.

The airlines have made the system very complex, confusing and frustrating. It is what it is, and we can’t changed it that much. However, we can find ways to make the system work for us — and to do that, we need to know it really well. That’s why I believe every traveler can use a bit of education.

My other main point was about the importance of elite airline status, which is the only decent way to travel today. The reality is that airlines don’t even pretend to try taking care of you if something goes wrong unless you are a loyal customer. More practically, elite passengers are exempt from luggage and other fees.

Unfortunately, most people don’t even try to achieve elite status, because they only travel a couple of times a year. As I wrote last month, you only need 4,000 miles on Greece’s Aegean Airlines to get silver status on the Star Alliance, and Aegean gives you 1,000 miles just for signing up. You don’t have to fly on Aegean — just to credit your miles from flights on any of the 28 Star carriers to that program. Silver status waives baggage fees on United Airlines, US Airways and Continental Airlines.

I was amused to read in the comments on the Diane Rehm Show’s website that a listener accused me of being unpatriotic for recommending membership in a foreign airline’s frequent-flier program.