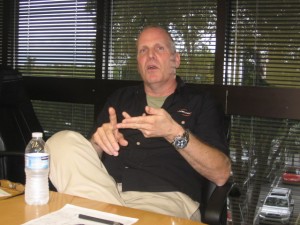 Don’t be afraid — this is the message I have for travelers who may be concerned about losing the ability for comparison-shopping because of the war between American Airlines and online travel agencies. The longtime Global Distribution Systems (GDS) model is about to change, and many people stand to lose lots of money. That’s why they are trying to scare you.

For decades, the GDS model has been the norm for distributing airline data and booking flights, which has given the three main GDS companies in the world — Sabre, Amadeus and Travelport — enormous power.

You might have heard that American was on Sabre and United on Apollo, which is now part of Traveport. That means that the respective GDS hosts the airline’s data and controls its content, delivery, display, and most of its sales. The airline gives the GDS its data in parts, but it’s the GDS that in effect manufactures the airline’s product.

When an airline is so much dependent on a GDS, it ends up paying a high price. With all the money the industry has been losing in recent years, it was no surprise that airline executives began looking for ways to lower distribution costs.

In the meantime, technology companies like Farelogix and Datalex were hard at work trying to build channels through which airlines could distribute and sell their products directly to buyers — a capability that would free them from the grip of their GDS and significantly reduce costs.

In late January, I visited Farelogix’s main office in Miami to learn more about the company’s game-changing products. Jim Davidson, the president and CEO, told me that a dozen airlines now use a “Direct Connect” channel, including American, United, US Airways, Air Canada, Lufthansa, Emirates and Singapore Airlines. So far, that direct channel has been implemented on the carriers’ websites and in their reservations departments.

However, that’s not where the majority of airline tickets are sold. According to Farelogix, about 60 percent of the roughly 1 billion tickets issued worldwide each year are sold through indirect channels, and virtually all of them use a GDS. The average GDS fee paid by the airlines is about $12 per ticket, or more than $7 billion a year in distribution costs, Davidson said. In contrast, Farelogix’s “Direct Connect” offers a carrier the opportunity to spend only between $2 and $3 per ticket, saving about 80 percent of the current costs.

Does it then surprise anyone that American wants to expand usage of its direct channel to third-party providers, such as traditional and online travel agencies? The direct model offers more benefits than cost-saving. It allows the carrier to control the search results when you look for a flight, and to display extra products like priority check-in and boarding, which bring in hundreds of millions of dollars in annual ancillary revenue.

“American’s approach will allow travel agencies the freedom to communicate reservation data directly with the airline, in the same way that many agencies work with hotel and car rental companies today,” the carrier said about “Direct Connect” on its website in December 2010. It advised customers to use sites like Kayak, which shows flight data but doesn’t have booking capabilities, to compare fares and then book a ticket on the carrier’s website.

The biggest irony in this saga so far has been the January announcement by Sabre, the GDS American created more than four decades ago and the host of its data until recently, that it intended to drop American data from its offering later in the year. Litigation followed, but later the two companies agreed to cool it off and negotiate.

Farelogix’s Davidson predicted that the future standard will probably be a hybrid model, because the GDS system is not going anywhere, and airlines need that system’s capability to reach the vast and lucrative business market.

But the carriers don’t need to outsource the “manufacturing of their products” to a GDS anymore, Davidson said. They can host their own data, do all the packaging, and deliver their final product to the GDS, which can just display and sell it. Farelogix calls “Direct Connect” an airline’s “merchandising engine.” The carriers will still have to pay GDS fees, but they would be much smaller than $12 per ticket, because the GDS function would be much more limited.

Orbitz and Expedia are resisting American’s attempts to move to a direct channel, which have proven successful with Priceline and other sites, due to financial considerations. Although not publicly known, the revenue they get from their GDS kickbacks is most likely higher than what American has offered them for flight displays and bookings through “Direct Connect.”

Why are the GDS companies resisting the direct model? Obviously, because they would lose billions of dollars in revenues. In fact, “Direct Connect” can be easily integrated into a GDS, Davidson said, with some airlines taking advantage of all current GDS functionalities, and others using only the ones they need. Not only have the GDS companies rejected that, but they have began penalizing travel agencies and other providers that use direct channels in addition to their GDS. In turn, American has started imposing fees on GDS bookings.

The GDS companies and other supporters of the current system have been crying fowl about American’s demands, accusing the airline of trying to suppress data transparency and make comparison-shopping more difficult for consumers.

But is that a fair criticism? If you examine the direct model closely and see how it works, which I’ve done, you might disagree with the status-quo advocates. Integrating “Direct Connect” properly with or in a GDS would do nothing to prevent comparison-shopping. Actually, there would be an added benefit for travelers, because they would be able to see not only airfares but any extra fees and charges, as well as products like preferred seating and priority boarding.

There is only one thing about “Direct Connect” that concerns me a bit. In October, I wrote about airlines finding new ways to overcharge unsuspecting fliers by using sophisticated software designed to increase prices based on customers’ “willingness to pay.” One of the direct model’s features is that it allows carriers to display search results based on “who’s asking,” as Farelogix puts it. I fear that when they have full control of their product-making and distribution, the airlines might come up with even more ways to “maximize revenue.”

If that happens, we’ll have to become more knowledgeable and sophisticated travelers to make sure we aren’t taken for a ride.