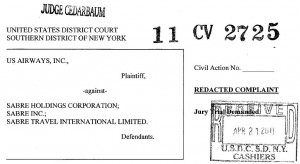 The title page of a complaint filed by US Airways against Sabre, a GDS company.

One by one, airlines are waking up to the sobering reality of the modern Global Distribution System (GDS) model, which they created decades ago. Two carriers have now taken legal action, and this is only the beginning. If more airlines want to see changes and lower costs, they should join forces instead of watching from the sidelines.

Judge Miriam Goldman Cedarbaum of the United States District Court for the Southern District of New York is about to become an expert on airline data distribution — in the 82nd year of her life. You can see her name stamped on a complaint (pictured above) filed last week by US Airways against Sabre, the largest GDS in the United States.

Sabre should take this lawsuit very seriously. Cedarbaum is not just any judge, and she is certainly not to be trifled with. One of the many high-profile cases she has overseen was against would-be Times Square bomber Faisal Shahzad, who was sentenced to life in prison without parole in October.

The most important reason for Sabre to prepare for a serious fight is the actual merit of the US Airways complaint, which the GDS predictably dismissed in a press release after the court filing. The airline accuses Sabre of monopoly, unfair practices and stifling competition by “locking travel agents” into using the GDS, so they “effectively become unable and unwilling to provide their customers with alternative, more efficient” booking channels.

“Rather than compete on the merits, Sabre has used its massive power over airlines such as US Airways to entrench its antiquated and inefficient technological systems, to preserve its supra-competitive booking fees, and to harm competition,” the carrier wrote in its complaint.

“Sabre’s technology has hardly changed from your grandfather’s distribution system, and was long ago left in the dust by new, innovative solutions that are web-based and take advantage of the networked economy,” it added. “These new offerings, however, have been stifled by the GDSs’ grasp over travel agencies and the exercise of their market power over airlines.”

The airline is referring to the technology I’ve written about before, known as a “Direct Connect” model, which allows carriers to host their data and make bookings independently of a GDS. Airlines prefer that model because it lets them control their data and offer non-airfare products, and it also saves them lots of money.

As I explained in February, about 60 percent of the roughly 1 billion tickets issued worldwide each year are sold through a GDS, according to Farelogix, a technology company mentioned in the US Airways filing. The average GDS fee paid by the airlines is about $12 per ticket, or more than $7 billion a year in distribution costs, Farelogix CEO Jim Davidson told me. In contrast, Farelogix’s “Direct Connect” allows carriers to spend only between $2 and $3 per ticket, saving about 80 percent of the current costs.

In its court filing, US Airways said that 35 percent of its revenue, “amounting to
over $3.5 billion annually, is booked through Sabre.” That’s exactly why no airline wants to be taken off a GDS — whether Sabre, Travelport or Amadeus. That’s also the reason why US Airways is only the second carrier — after American Airlines — to stand up to a GDS.

Having just written about a hybrid model that would make it possible for GDS portals to provide access to a carrier’s “Direct Connect” channel, I was surprised when US Airways signed a new agreement with Sabre several weeks ago. Instead of joining in America’s efforts to change the GDS model, US Airways is simply caving in, I thought.

Earlier this month, American reached an agreement with Expedia to implement a hybrid model, and then sued Travelport and Orbitz, claiming violation of antitrust laws. Online travel agencies like Expedia and Orbitz rely almost exclusively on GDS use, and some of them are owned by GDS companies.

Now US Airways has reconsidered and decided in favor of a fight. In its complaint, it says that Sabre forced it into their latest contract with “numerous oppressive and
anti-competitive terms.” The carrier “had no choice but to sign the agreement, which it did under protest, or face a complete shut off from Sabre’s network,” it said.

One of the most draconian clauses is that US Airways is banned from offering fares on its website unless it also makes them available to Sabre. In addition, Sabre penalizes travel agents who book tickets through any other channel.

As my record in this column shows, I’m a frequent critic of the airlines. But their complaints against the GDS companies are legitimate and need to be addressed. What the GDS management teams are doing is nothing short of business bullying. Worse yet, they pretend to be victims, trying to trick consumers into supporting them by falsely claiming that their model is the only way to ensure comparison-shopping.

Instead, they should be less greedy and let go of their unrealistic dreams of enormous and easy profits. Resisting inevitable change as a result of advanced technology is a recipe for extinction, not prosperity and longevity. The sooner the GDS companies realize that, the better for all parties in the air travel system, including consumers.

For their part, airlines should unite in their opposition to the current GDS model if they want to see results they like. They shouldn’t leave it to American and US Airways to fight their battle alone and then benefit from the outcome — and I’m sure the outcome will ultimately be more favorable for the airlines than the present state of data distribution.