Consider options before giving up seat

HomeConsider options before giving up seat 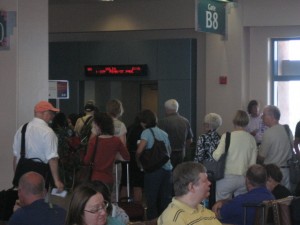 Passengers boarding a flight at the Albuquerque, NM, airport.

Volunteering to get bumped from a flight is an issue often raised by participants in the events on my book tour. As is the case with most situations I discuss in “Decoding Air Travel,” I advice travelers to think carefully before giving up their seat and examine the alternative ways to get to their destination — and to know exactly what they would get in exchange.

U.S. airlines, which overbook flights all the time, offer discount vouchers valued at as much as $400 for bumps on domestic flights, and up to $800 on international flights. Those certificates are very tempting and can save you lots of money. In fact, many travelers take certain trips only because they have vouchers to use.

However, unless you are familiar with alternative flights that will get you to your destination, you may be asking for trouble.

I’ve never volunteered to get bumped. Comfort and convenience are very important to me during travel, so I’m unlikely to give up a Business or First Class seat for Economy.

I was prepared to relinquish my seat on a flight for the first time late last month, and even put my name on the list, but then I removed it. I was to fly nonstop from Denver (DEN) to Milwaukee (MKE) on a coach-only Canadair regional aircraft, and I could afford to arrive in MKE as much as four hours later than scheduled. I also knew my flight was oversold.

During online check-in the day before the flight, I was asked whether I’d give up my seat if it were needed, and I said yes. Later that night, however, I decided to take a look at my options. The only other nonstop flight to MKE was not until 8 p.m., which was too late for me, so I’d have to connect in Chicago (ORD). I checked out the DEN-ORD flights — there were two I could take, but one was sold out, and on the other one I would be stuck in a middle coach seat.

As soon as I got to the airport in the morning, I asked to be taken off the volunteer list.

Had I stayed on the list, I would have negotiated with the gate agent exactly what I would have received for diving up my seat, on which alternate flight I would have been rebooked, and whether I would have sat in Economy or First Class.

Even though most U.S. carriers are moving toward the discount-voucher approach, some agents might still try to give you “a free round trip anywhere in the United States.” Before you accept it, keep in mind that those certificates come with many restrictions, such as advance purchase and minimum-stay requirements. They must be booked in a certain coach booking class, which may not be available on the flights you want. In addition, you won’t earn any frequent-flier miles on that trip, and it cannot be upgraded.

A discount voucher, on the other hand, is just that — it will take $400 or more off a future ticket for you or someone else designated by you. Any restrictions depend on the rules of the fare you purchase, and any published fare is eligible. You will earn miles, including elite-qualifying ones, and you can upgrade your ticket.