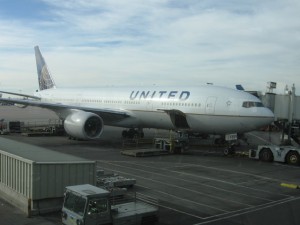 The decision by United Airlines’ management to use Continental’s Shares reservations system for the merged carrier has been causing serious problems since its implementation last weekend. So the news that the airline is working on a new version of its IT platform, integrating some of the features of the pre-merger United’s Apollo system, is very welcome, indeed.

It was hardly surprising that CEO Jeff Smisek and his team chose to keep Shares, given that most policies and practices of the combined carrier have followed the way Continental did business under Smisek. But in this case, the decision made good financial sense — Continental has owned Shares for years, while United paid Travelport, the company that owns Apollo.

As I completed the last research trip for my upcoming book on the U.S. Foreign Service on Sunday, I was worried much less than many passengers and United employees, who had warned me not to fly during the first days of the integrated system. The merger was first announced in May 2010, so the company surely had plenty of time to prepare — and if not, it would have delayed integration, I thought.

I was wrong. On the first day of the new era, March 3, I monitored the situation from Frankfurt, where I overnighted on my way back from Iraq. Delays were widespread, which the United employees I talked to the next day attributed largely to their inability to board passengers automatically by scanning boarding passes — each person had to be boarded manually.

The other reason for the problems was how unprepared pre-merger United agents were to use Shares. They had been trained, but obviously not quite enough — actually, it may be more a matter of experience than training.

The real issue is Shares’ complexity, clumsiness, user-unfriendliness and lack of intuitiveness compared to Apollo. That was my first impression when I initially looked at it at three different airports, and it was confirmed by several longtime United employees, some of whom showed me long multiple-page instructions for basic functions, which resembled complex formulas.

Some agents are still having trouble printing boarding passes for flights for which I’d checked in online — one said, “It would have taken me five seconds in Apollo.” Others find it challenging to decipher seat maps.

I didn’t want to make a final judgment on Shares without consulting Continental employees, who have been using the system for years, and I had a chance to do that yesterday. Those agents had been sent to pre-merger United stations to help their inexperienced new colleagues — but from what I could see, there was much more demand than supply.

Those Continental agents, who also had some knowledge of Apollo, agreed with my first impressions of Shares. They also told me that Continental hadn’t invested much in modernizing Shares, but that was about to change. In a few months, they said, there will be a new version combining current features with some of the best Apollo functions.

One can only hope. The question is, why couldn’t integration wait until then? Those poor pre-merger United agents have to learn one system now, and another — apparently less complicated — in a few months?

I asked a corporate contact at United about the new plans and received the following response: “I think you’ve been hearing about a new GUI [graphical user interface] that will be added to Shares later this year. It will make it more user-friendly for our agents. We didn’t want to postpone the customer benefits that were gained by going to one passenger service system — one frequent-flier program, one website, any agent able to help any customer, etc. — by waiting until the GUI was in place.”

A task of this magnitude will always be accompanied by problems, especially at the world’s largest airline. At least for me, however, those problems have been much worse than I expected. Perhaps this is due in part to the higher numbers of pre-merger United employees compared to Continental’s — after all, United was the bigger airline.

Shares is incapable of performing some vital functions that Apollo offered. For example, upgrades using miles or certificates can no longer be waitlisted less than 24 hours before departure. So if your international flight, which you have upgraded with miles, is canceled and you are rebooked on another flight, you won’t be put on an upgrade waitlist on the day of travel. If, however, there is an available upgrade seat, you should be able to get it.

Another problem that is affecting thousands of passengers has to do with upgrades waitlisted in Apollo before the conversion. All segments waitlisted in NF booking class, which United used for upgrades to First Class, converted into ON in Shares. ON inventory exists only on three-cabin aircraft. On two-cabin planes however, the correct code is R. So if you are waitlisted in ON on a two-cabin domestic flight, you will never clear, because there will never be availability in that booking class.

United has a representative on FlyerTalk who monitors various comments, and she has indicated the carrier is aware of the incorrect conversion issue but hasn’t yet found a solution.

One of my favorite features of the old Continental website, which United’s didn’t have, was the information about where your aircraft is coming from. I was very happy it was preserved on the new site, but my happiness has been seriously tempered this week. The tool is offering plenty of erroneous data.

Just one example: Today’s flight 984 from San Francisco to Portland, OR, is operated on a Boeing 757. According to the website, the plane is coming from Monterey, CA. The problem is that the aircraft flying back from Monterey is an Embraer regional jet.

Here is the silver lining in all this: Whatever the problems at the new United, they pale in comparison to the systemic breakdowns that occurred during the US Airways-America West merger in the middle of the last decade.