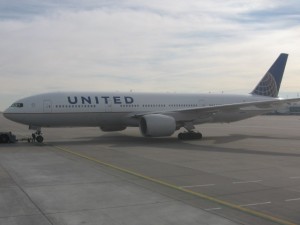 United Airlines, already one of the biggest abusers of fake “direct” flights before its merger with Continental, has increased further the number of those flights in its schedule. Its oddest decision was to introduce fictitious “direct” flights, which consist of two or more segments with nothing in common but their number, between its hubs.

If you are shopping for a ticket from Chicago (ORD) to Denver (DEN), be very careful which flight you book. In addition to 10 daily nonstops with flying time of about 2 hours, United currently has three “direct” flights on that route, but they make a “stop” in Minneapolis (MSP), Des Moines, Iowa, (DSM) and Kansas City, Mo., (MCI), respectively.

Watch out for any indication of that, as obscure as it may be. In most cases, those are not just “stops” — the two “legs” are operated by different aircraft, so they are simply connecting flights. For example, the first “leg” of flight 817 yesterday arrived in Minneapolis at gate E6, but the “continuation” departed from gate E10.

As I’ve written before, most flights labelled “direct” by U.S. carriers are fictitious — they don’t exist in real life. They are meant to make more money for the airlines by tricking customers and perverting a practice that was actually started to help travelers. In fact, they spell nothing but trouble for passengers.

Historically, United and Delta have had more fake “direct” flights in their schedules than any other U.S. carriers, though all airlines engage in that practice.

For years, United has focused on adding at least one domestic tag to most of its international flights. For instance, flight 917 from Frankfurt (FRA) to Washington (IAD) “continues” on to Seattle (SEA), though the second flight has nothing in common with the fist. Yesterday, the flight from FRA was operated by a three-cabin Boeing 777, as usual, and arrived at IAD at gate C1. The flight to SEA was operated by a two-cabin Boeing 757 and departed from gate D4.

In the last several months, United has significantly stepped up the questionable practice on purely domestic flights. Currently, there are very few flights with only one segment. Most flights between Washington National (DCA) and Chicago (ORD) used to be one-leg flights. Now, most are part of fake “direct” flights with two or three segments.

It’s clear why the airline is selling “direct” flights from DCA to San Francisco (SFO) — it wants you to think that you can go all the way to the West coast from DCA with no hassle.

But why on earth is it selling fake “direct” flights from IAD to SFO, given that there are nine nonstops on that hub-to-hub route on most days? In its upcoming winter schedule, it has four “direct” flights between those cities. Two of them have two segments — one “stopping” in Dallas (DFW) and one in SEA. The other two have three segments each — one “stopping” in DEN and Las Vegas (LAS), and the other one in ORD and San Diego (SAN).

Is it possible that United has run out of flight numbers because of the merger? That may be the case with three-digit numbers, but what’s wrong with four-digit ones?