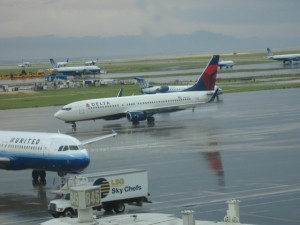 Do you sometimes prefer making a connection or two instead of taking a nonstop flight, either to save money or rack up more frequent-flier miles? You might have to change your ways. Domestic U.S. transfers are now allowed much less frequently than before, and making connections on flights between an airline’s hubs is almost impossible.

No big deal, you might say. Wouldn’t any reasonable person choose a nonstop any time? Not necessarily. Different travelers have different priorities — some would rather save time, others money. But the best thing about the previous practice was that passengers had options. Now, that’s no longer the case.

Until June, you could make four transfers each way between Washington and Los Angeles on United Airlines — both cities are United hubs. Since then, the lowest fares have said this in the legal routing rules:

TRAVEL MUST BE NONSTOP

It’s not until fares of just under $700 round trip that the routing gets a bit more liberal — but it allows only one connection and only at a hub airport. Here is how this looks in the United tariff:

The slash indicates that you must choose among Chicago, Denver and San Francisco, but you can’t go through two of them — you would have been able to do so had there been a hyphen between them.

How does this affect you? As of this morning, the lowest published United fare between Washington and Los Angeles is $119 each way and books in L class — but it’s only valid on nonstop flights. What if none of the nonstops on the day you need to fly has available L seats? Then you will have to buy up to S booking class — the next lowest currently published — or whatever seat is available. There may be L availability on a connection through Denver, but it wouldn’t qualify for the L fare because it’s not nonstop. The bottom line is, the routing restriction will cost you at least $100 more.

United was actually the last of the major carriers to clamp down on routing rules, and many mileage runners — people who fly just to accumulate miles — had lots of fun for a long time. It still has one of the more liberal rules — except between hubs. American Airlines and US Airways follow the same policy. American requires a nonstop between Dallas and Miami, and US Airways between Philadelphia and Phoenix.

Delta Airlines is one of the strictest. For example, discounted fares between Atlanta, its main hub, and most major cities require a nonstop, even if that city is not a hub, such as San Diego and Las Vegas. A fair comparison would be the United routing between Washington and Las Vegas, which is much more generous:

This is actually a typical United routing. You can transfer only once at a hub, but it doesn’t necessarily have to be a United hub — Continental and US Airways hubs are also allowed, because United code-shares a huge number of their flights. Of course, current Continental hubs will become United hubs once their merger is complete.

Delta is so strict, in fact, that sometimes it requires a nonstop when neither of the two cities is a hub — for example, between Washington and Los Angeles. The curious part is that Delta doesn’t fly nonstop between those cities, but it code-shares the only daily Alaska Airlines flight from Washington National. So the only way to get a decent fare is to book that one flight at 9:15 a.m. If you can’t, you have to pony up.

To be fair, Delta allows both nonstops and “direct” flights, and when the other carriers say nonstop, they do mean nonstop. “Direct” flights are those fictitious flights I wrote about last month, which have nothing in common except for their number — most of them are operated on different planes and require changing gates and sometimes even terminals.

In addition, Delta is not always as draconian as in the Washington-Los Angeles case. Here is the routing between non-hubs Chicago and Los Angeles:

The smaller the city, the more liberal the routing — although some bigger places seem to fall through the cracks, probably not for too long. Here is the United routing from Washington to Houston.

If you look closely, you will see that up to four transfers are permitted here — this many hyphens are very rare these days. I have the feeling this generosity will disappear once United and Continental start flying as one airline, for which both Washington and Houston will be hubs.

International routings are much more liberal and sometime can fill a page, but that’s a topic for another column.