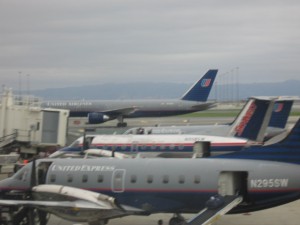 If you’ve become accustomed to upgrading your domestic flights on United Airlines months in advance, the party will soon be over. The carrier is abandoning its current system of so-called confirmed upgrades in favor of the last-minute upgrades that are more popular in the U.S. industry.

United announced the change last week, although it’s not planning to implement it until spring. The current system apparently was confusing for some passengers, although I prefer to call it sophisticated and not at all difficult to master if you are a semi-frequent flier.

However, that’s not why United is making the change. Rather, in trying to maximize revenue from selling first-class seats for cash, it will keep more of those seats open until just before departure, and if it can’t sell them, it will give them to elite customers for “free,” meaning it won’t charge frequent-flier miles for the upgrades.

“In general, many first- or business-class bookings do not occur until a week or two before departure, so upgrade seats may not be available until closer to your flight date,” the airline said.

Domestic upgrades cover not only the United States, including Hawaii, but also Canada, the Caribbean, Mexico and the rest of Central America. Currently, there are three ways to upgrade flights to those destinations. The first two — using miles or electronic certificates, of which top elite fliers can earn up to eight a year — can secure a first-class seat as soon as your ticket is issued, if upgrade space is available.

The third way is with different electronic certificates — there is no limit to how many you can earn, but the key difference is that they can confirm an upgrade only a few days before your flight, based on your status. The lowest elite level, Premier, allows confirmation 48 hours in advance, and the highest, 1K, 100 hours. United has an invitation-only unpublished level, Global Services, which entitles you to confirm an upgrade 120 hours in advance.

Beginning the second quarter of next year, that last model will be used as the basis of the new upgrade system. No certificates will be necessary and none will be earned. Instead, all elite members of United’s Mileage Plus program will be wait-listed for a “free” upgrade without having to request it. Upgrades will clear in the status-based time frames, and if two passengers with the same elite level compete for the same seat, the one who paid a higher fare will get it.

Elite members will no longer be able to sponsor upgrades for others, which they can now do with their confirmed certificates, regardless of whether they are on the same flight. The new policy permits you to bring along only one other passenger, who will clear the wait list according to your status — but you must be on the same reservation.

As a 1K member, I wondered what would happen if another 1K’s travel companion paid a higher fare than mine. Would that person trump me even if he had no elite status at all? I didn’t find an answer in the information United has published on its Web site so far, so I called Mileage Plus. It turns out I would be trumped, indeed.

I was also told that, until the new policy is implemented, 1K members will continue to earn the existing electronic certificates, which can be used until they expire a year after they have been issued.

Once all domestic certificates go away, the only way for most travelers to confirm an upgrade in advance will be with miles. However, beginning Jan. 12, United is increasing the number of miles required to upgrade on some routes and fares, and it’s also adding a “co-pay” that can be rather steep. For example, the co-pay to upgrade to Hawaii will be up to $500 each way, depending on your fare.

There will be one other way to confirm a domestic upgrade in advance, but most United elites don’t consider it a reasonable option. The carrier will keep its so-called “system-wide” certificates, which can be used on international flights. But why would you waste a certificate you could use to fly to Hong Kong, for example, on a short domestic flight?

The new system is similar to those of most other major U.S. carriers — the main difference is that United will offer free last-minute upgrades to Hawaii, which its competitors exclude. However, those upgrades won’t be allowed on so-called Premium Service (P.S.) flights between New York and Los Angeles and San Francisco, which are operated on specially configured planes with three cabins, including business and first class, and offer better meals, entertainment and other services than on regular flights.

Only time will tell if United can sell those seats for cash, but with a small and frequently oversold coach P.S. cabin, free upgrades at the gate cannot be ruled out.

NOTE: About a month after United decided to eliminate confirmed domestic upgrades, it changed its mind and kept them in place following a huge outcry by its 1K members.