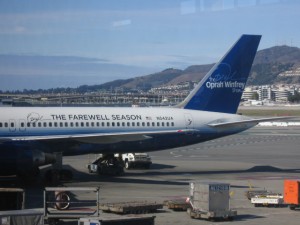 Airlines are consistently among the most criticized companies by both the public and the media. While much of the criticism is deserved, does some of it amount to nothing more than badmouthing that helps no one? Isn’t it time for fliers to learn the air travel system’s ins and outs, and not blame the airlines for all their ills on the road?

In this column, I’ve denounced certain airline practices, such as the fictitious “direct” flights that are simply two flights with the same number but nothing else in common. There is no question the industry has made the system very complex, mostly for financial reasons, and it’s profiting from customers’ lack of knowledge.

However, the system is what it is, and there isn’t much we can do to change it to our liking. What we can do is invest some time and effort in learning its intricacies, rules and restrictions, so we don’t feel like we got screwed next time we fly and make sure we don’t miss a wedding or a funeral, or let an airline ruin our vacation.

I talked about this on Peter Greenberg’s syndicated radio show last weekend, though I probably did too much complaining before I got to the point. Greenberg used to be the travel editor for NBC’s “Today” show but moved to CBS last year.

There are certainly times when criticism — or constructive customer feedback — does make a difference. Take just one issue with United Airlines. Last year, it announced it would do away with advance domestic upgrade certificates for top elites, but after an outcry it reversed its decision. Earlier this month, the carrier said it would reduce the number of certificates elite fliers get annually — another outcry followed, and the implementation of the new policy was delayed by a year.

Contrast that to the experience of Michelle Renee, about which I wrote last year. She decided to skip a flight on her ticketed itinerary from Los Angeles to Australia on United, but she didn’t tell the airline and was shocked to find out at the Sydney airport that the change would incur a fee. She wrote a blistering blog post against United on the Huffington Post. Had she known that if you miss a ticketed flight voluntarily, the rest of your itinerary is automatically voided, she would have thanked the agent who salvaged her ticket.

Is it the airlines’ job to educate passengers about the rules they impose or are travelers responsible for learning those rules on their own? Do most of us buy plane tickets blindly, without reading and understanding the conditions and restrictions that come with them?

In a more recent Huffington Post blog, another United critic, Tamar Abrams, wrote about being mistreated by an employee after her flight from Singapore to Tokyo was canceled. The agent’s behavior aside, I suggested to Abrams that she didn’t have to put herself in that agent’s hands. In fact, she could have known about the cancellation about 12 hours earlier, before she had gone to bed, because her plane didn’t make it to Singapore from Tokyo the previous night. She could have called United then and got rebooked, even before getting to the airport.

Was it Abrams’ responsibility to track her plane and predict the cancellation? No, but it would have helped her a lot and saved her hassle and an unpleasant experience. United usually contacts passengers regarding flight disruptions, though Abrams said she didn’t get notified in advance.

The ease with which anyone can book a plane ticket online gives the wrong impression that modern air travel is a piece of cake. Yet, most fliers don’t know the meaning of a code-share flight or the difference between a nonstop and a direct flight.

Next time, before you spend $1,000 on a ticket, it might be a good idea to learn exactly what you are buying and what it entitles you to. After all, travel should be an exciting experience, not a nuisance we dread.