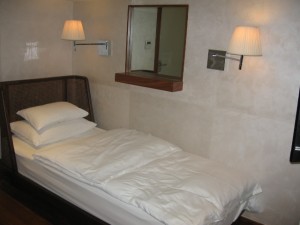 Turkish Airlines has built an impressive business lounge at its hub is Istanbul, with the best sleeping rooms I’ve seen anywhere in the world, including in First Class lounges. The best, that is, until you try to sleep — unless you don’t mind loud noise that even Bose headphones on top of earplugs can’t block out.

As I’ve written before, Turkish has made significant progress in recent years toward becoming a world-class carrier, but it’s still a long way from being anywhere close to the top. It rushes to do something it deems top-notch but doesn’t really think it through — and for high-end customers, a little glitz doesn’t sparkle brightly enough if the entire experience is inconsistent and unpredictable.

So Turkish designed these fabulous sleeping rooms in its relatively new Istanbul lounge, which are no different from really nice, albeit small, hotel rooms — with a real bed, comfortable and clean linens, desk, closet, bathrobe and slippers. But then it put shower suites right across from the sleeping-room doors, just a few feet away.

Admittedly, my first thought when I saw that setup was, “How convenient.” I used one of those rooms in the early morning hours several weeks ago after misconnecting on my way to Iraq. I took a shower and hoped to get at least three hours of sleep. Unfortunately, halfway through my rest, I was awoken by loud noise coming from passengers using the showers and staff cleaning the suites — not the actual showering and cleaning, but the talking and laughing right outside my door.

Since my earplugs were obviously not helping, I added my Bose headphones as reinforcement, even though sleeping with them is not exactly comfortable — all in vein. There was no more sleep. The glass divide that served as a wall also prevented the room from becoming sufficiently dark, but there are eyeshades for that.

At the end of the day, a great idea and superb product didn’t leave me with a great overall experience because of poor floor design and execution. Perhaps better soundproofing would have minimized the noise, if there was no way to isolate the sleeping room at least somewhat from the main lounge area. One could argue that lying in a real bed is still a luxury at an airport, even if you can’t sleep, but that’s not the point. Why not just put open beds right in the middle of the lounge? Or why have beds at all?

Two weeks earlier, I had used a sleeping room in Thai Airways’ First Class lounge in Bangkok. The rooms and beds weren’t nearly as fancy and comfortable as those in Istanbul, but the main lounge area was much farther away. Both Turkish and Thai are members of the global Star Alliance.

I suppose we can’t have it all.